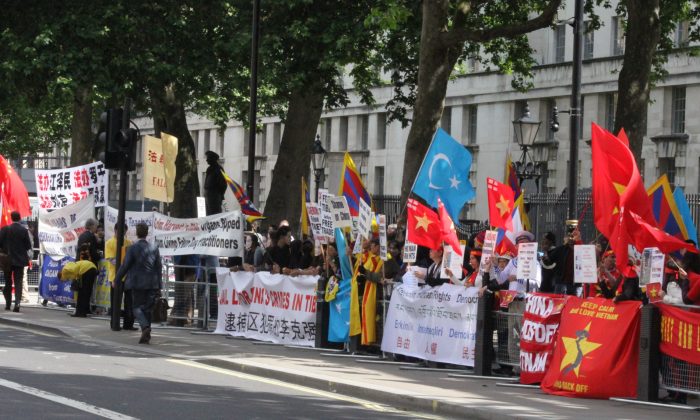 The Chinese Communist Party flag; Falun Gong banners; the red, blue and yellow flag of Tibet; the pale blue flag of Uighuristan (Islamic Republic of East Turkestan); and the red Vietnamese flag with Flag of St George in the top corner to represent English Vietnamese; at Whitehall on June 17. (Wenjing/Da Ji Yuan)
Europe

A diverse range of over 100 demonstrators greeted the Premier of China, Li Keqiang, as he visited Downing Street on June 17.

Li Keqiang arrived at around 4p.m. and stayed in Downing Street for about an hour.

A lot of noise, especially from drums, was produced by a Lion Dance troupe hired by the Chinese Embassy.

The spokesman for the troupe, Ashley Davis, told the London Evening Standard that they were from Medway in Kent and paid to welcome Li. “We didn’t know what time he was arriving so our performance has gone on for rather a long time,” he said.

Lee Hall of the Falun Dafa Association UK said, “people who come to support the CCP are probably paid to support the CCP, making lots of noise.” He then indicated people on his other side “also making lots of noise. And in the middle Falun Gong practitioners being very peaceful, not making any noise, peacefully protesting and everyone can see what a good thing that is and are impressed by Falun Gong practitioners’ peaceful protest.”

Mr Hall said, “the message to the UK government is, speak out against the human rights abuses and the persecution [of Falun Gong] in China. People passing by, so many have taken leaflets, we’ve run out of leaflets, and we brought a lot of leaflets. Everyone wants one.

“People are signing our petitions for human rights for Falun Gong practitioners in China. People are speaking out but we need the government to speak out as well, not in private but in public.”

Mr Hall went to China in 2002 but was immediately deported so he was glad to have an opportunity to tell the many sightseers during Li Keqiang’s visit about organ harvesting and the persecution of Falun Gong.

Another protester at Whitehall on the day, Georgina Halford-Hall, is a trustee of Whistleblowers UK, and said: “I think its really important that you protest and bring this to the world’s attention. It’s a crime against humanity. People have had their voice, their right to protest taken away.

“Until you live in a police state or until something goes wrong for you, people don’t take any notice of it. It’s only when it impacts on [you]. It’s really sad, except for a few of us like me, who are absolutely ardent protesters, campaigners for civil rights.”

Pro-democracy activist Shao Jiang, a member of CUTS, said at the protest that the British government not openly criticising CCP human rights issues is very worrying.

He was imprisoned for protests in Tiananmen Square in 1989. He believes the British Government is being bullied and it should challenge the CCP to adhere to “the International Bill of Rights and human rights treaties’ core demands to help bring about human rights, freedom and democracy for all the people of China.”

Many protesting Tibetans wore handcuffs as a symbol of Tibetan suppression by the CCP. Some wore masks of CCP officials and signs demanding “Cameron Raise Tibet with Li Keqiang.”

There were around 20 Vietnamese protesters with national flags, many carrying signs saying, “We, British Vietnamese, strongly oppose China’s brutal and barbaric attack on Vietnamese fishermen in Vietnamese waters.”

They were drawing attention to the dispute inside Vietnamese EEZ (maritime territorial and exclusive economic zone) in which they say the Chinese navy has been killing Vietnamese fishermen.

With reporting by Wenjing and Xiuming Tang