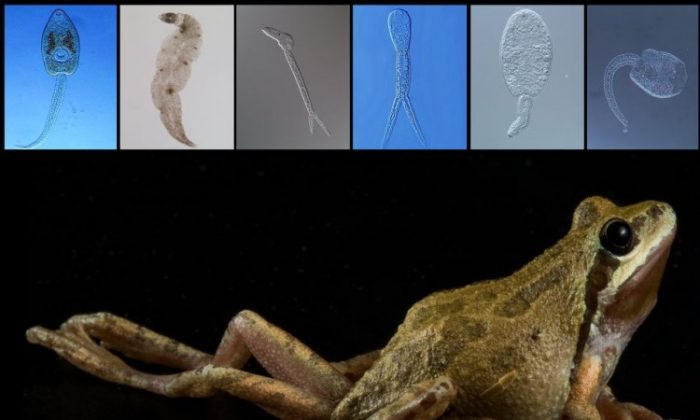 Human activities, such as pollution and habitat destruction, are contributing to a global decline in biodiversity, and about 40 percent of amphibian species are affected with over 200 extinct in the last four decades.

Two researchers at the University of Colorado—Boulder looked at the Pacific chorus frog Pseudacris regilla, both in the field and the lab. They studied the effects of six trematode, or flatworm, parasites, including harmful species in the genus Ribeiroia, which can cause the development of extra or missing limbs, and the genus Echinostoma, which can cause death.

The team found that infection success was 42 percent lower when frogs were exposed to all six parasites at once, rather than separately.

Interestingly, the order of parasite contact can have an effect upon host disease. When exposed to a dangerous parasite first, it was usually replaced by a less harmful one, whereas later exposure could trigger disease.

“Collectively, our findings illustrate the importance of considering the hidden role of parasite diversity in affecting disease risk,” said Pieter Johnson in a press release.

“While our study was on amphibian diseases, there is ample evidence to suggest similar processes can be occurring in humans and other groups of animals.”

Reports of deformed U.S. amphibians since the 1990s have led to speculation about the cause.

“It could be that the most dangerous parasites occur in greater numbers in disturbed environments,” said study co-author Jason Hoverman.

“If we are trying to minimize disease risk in humans or in threatened groups of animals like amphibians, studies like this will be able to tell us which scenarios are most likely to occur.”

The study was published in Proceedings of the National Academy of Sciences on May 21.