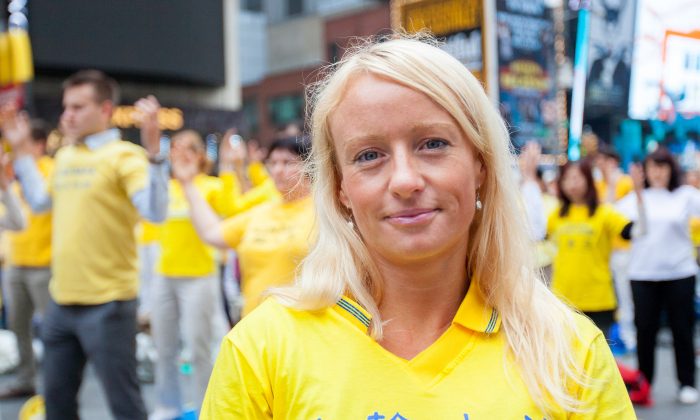 NEW YORK—Unlike its usual bustling self, Times Square was peaceful on Thursday as about one hundred practitioners of Falun Dafa gathered there to demonstrate the exercises of the practice.

Falun Dafa (also known as Falun Gong) is a spiritual practice consisting of five exercises and teachings based on the principles of truthfulness, compassion, and tolerance. Some 8,000 practitioners from at least 60 countries gathered in New York City this week to celebrate May 13, World Falun Dafa Day, and raise awareness about the persecution the communist party’s regime in China launched against the practice in 1999.

“I think those people who don’t have a voice, they need a voice,” said Denise Eggenschwiler, 36, a nurse from Switzerland. “You should not be persecuted because of truthfulness, compassion, tolerance—because you believe that.”

The practice was introduced in the early 1990s in China and quickly gained popularity. Some 100 million people took it up, according to a 1998 government survey. Yet then-leader of the regime, Jiang Zemin, felt threatened by Falun Gong’s popularity and ordered it to be “eradicated.” Since then, hundreds of thousands ended up in jails, and thousands, possibly tens of thousands, were tortured to death and their organs sold for transplants, according to independent investigators from Canada, U.S., and Great Britain.

Despite the persecution, Falun Dafa has spread to over 100 countries, according to the official website FalunDafa.org.

Eggenschwiler, who came to New York for the week of activities, has been practicing for over three years. “Everyone noticed my change,” she said, laughing. She’d fight less and be more calm. “I can much better handle my emotions,” she said. She’d like the same for the people in China. “They try to stand up for themselves. We need to support them.”

Vadim Berestetsky, 52, an architect and software designer from Israel, concurs. “Everyone who practices Falun Gong knows how this practice is precious and we know about the persecution in China, so we try our best to keep people aware about what’s going on,” he said.

Being a spiritual man and searching for answers, he ran in to the book of “Zhuan Falun,” the main text of Falun Dafa, on the internet in 1998. “I read a lot of books before and still I was greatly surprised,” he said. He’s been practicing ever since. “I’ve become inside a different person,” he said. “Falun Gong gives me perfect tools to work on myself, to work on my heart, and to improve it.”

Peter Ebertz, 55, a sub-sea engineer and commercial diver from Sweden, comes to New York every year to participate in Falun Gong activities. He started to practice Falun Dafa in 1995 with his wife because it “just felt right.”

For Valentine Masetti, 32, a fruit farmer from Florence, Italy, the activities have been a “really great experience.”

“We are all together for the same thing,” she said.