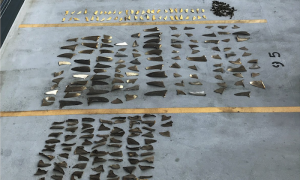 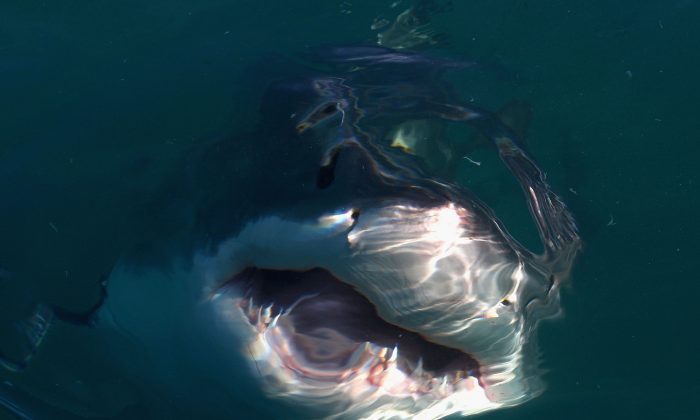 The stench of rotting sperm whale tempted a massive 50-year-old celebrity shark known as ‘Deep Blue’ out of retirement. The beast was caught on camera off the coast of Hawaii by divers who were able to swim with her.

Big Blue—estimated to be 20 feet long—was made famous by the Discovery Channel’s Shark Week, and is often given the title of the world’s largest shark on record.

Great White sharks are a rare sight for the divers, who were shocked when the giant frame of Great Blue emerged, dwarfing the tiger sharks and that they had expected to see swimming around a sperm whale carcass off Oahu, Hawaii’s third-largest island.

The shark was first spotted by local freediver Kimberly Jeffries on Jan. 13.

But after the encounter, Jeffries reviewed the footage and realised that Deep Blue wasn’t the only massive shark she had been swimming with.

“Tonight when I got home and after I got off the phone with the news something someone said bothered me,” she wrote on Facebook on Jan 16. I went over photos from three days of diving with sharks and realized that the sharks are different. We’ve now confirmed with scientists that they are indeed unique individuals and we’re working to get IDs out for everyone.”

Local diver Mark said that Great Blue’s ID checked out. “[Jeffries] was first to spot her on 13 January 2019, and we confirmed the ID with the white shark authority, SharkPix.com this morning,” he posted to Facebook.

Deep Blue disappeared after a day according to Mohler, but her companions put on a show for photographers and divers the following day.

Jeffries wrote on Facebook, “If you asked me a few days ago what the most amazing thing I’ve ever seen in Hawaiian waters the answer probably would be pretty different”

“If you asked me yesterday the answer would be freediving with Deep Blue, a great white, the largest ever documented, who was last seen in 2013 in Mexico,” Jeffries added.

Deep Blue, possibly the biggest White Shark identified, coming in at nearly 7 meters, was last spotted in Mexico. She…

“If you asked me right now, it would be freediving with, interacting with and photographing not one but multiple, different great whites AND Deep Blue.”

Dr. Melanie Hutchinson, a shark researcher for the University of Hawaii, told KOHN2 that the prehistoric species has been a frequent visitor to Hawaii since ancient times.

“They’ve been coming here forever. About 20% of the population from California and Mexico migrate here every year or every other year. So they are typically here in the winter,” Hutchinson explained.

“What they’re doing when they’re in Hawaii is really deep dives during the day. And so that’s why people don’t typically interact with them. I think the sperm whale kind of presented an opportunistic foraging opportunity so that’s probably why people saw this animal,” said Hutchinson.

But  Big Blue’s credentials may have suffered from a little celebrity spin, according to Michael Domeier, president of the Marine Conservation Science Institute.

“The claim that she is the largest white shark in the world is just a Discovery Channel gimmick,” he told Motherboard. “Deep Blue has never been measured, so how could anyone make that statement?”

Her age, too, is hard to judge, he said. Because she was already an adult when she was first encountered 20 years ago, she is likely to be at least 40 now. “Unfortunately the only way to accurately age a white shark is to kill it and look at the rings on the vertebrae, but no mystery is worth solving at that price!”