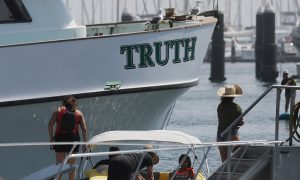 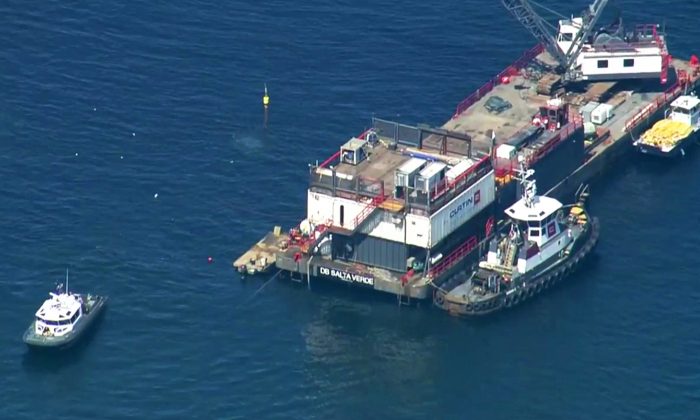 This photo from video provided by KABC-TV shows divers resuming their search for the final missing victim who perished in a boat fire off the Southern California coast on Sept. 11, 2019. (KABC-TV via AP)
US News

LOS ANGELES—Divers on Wednesday recovered the body of the last missing victim of a boat fire off the California coast that killed 34 people.

The Santa Barbara County Sheriff’s Office announced the end of the search on Twitter, saying it was “relieved to report” the final victim had been found.

Authorities were still doing DNA tests to confirm the identities of seven of the victims.

The Conception Incident Unified Command is relieved to report that search and recovery efforts today were successful in locating the last missing victim. DNA testing is still being conducted to confirm identities of 7 of the 34 victims recovered.#conception

Earlier in the day, the Coast Guard announced it has issued new safety recommendations in the wake of the tragedy near Santa Cruz Island, such as limiting the unsupervised charging of lithium-ion batteries and the use of power strips and extension cords.

The bulletin also suggests that owners and operators of vessels review emergency duties with the crew, identify emergency escapes, check all firefighting and lifesaving equipment onboard, and look at the condition of passenger accommodation spaces for “unsafe practices or other hazardous arrangements.”

The cause of the Sept. 2 fire has yet to be determined. Salvage efforts to recover the Conception—which authorities have said is expected to aid the investigation—resumed this week after several days of weather delays.

Five of the Conception’s six crew members survived and told investigators they made multiple attempts to save people who were trapped below deck.

Authorities have said they are looking at several factors in their investigation, including how batteries and electronics were stored and charged. They will also look into how the crew was trained and what crewmembers were doing at the time of the fire, which erupted in the middle of the night as the passengers slept.

The boat’s design will also come under scrutiny, particularly whether a bunkroom escape hatch was adequate.

The FBI, Coast Guard and U.S. Attorney’s Office in Los Angeles are conducting a criminal investigation, and the Coast Guard has convened a formal Marine Board of Investigation.

The four members of the board will look into “pre-accident historical events, the regulatory compliance of the Conception, crewmember duties and qualifications, weather conditions and reporting, safety and firefighting equipment, and Coast Guard oversight.”

That investigation is expected to take at least a year. The panel will seek to determine the factors that led to the fire, any possible evidence of misconduct, inattention to duty, negligence or willful ignorance of the law, and if any other factors caused or contributed to the deaths.

Coast Guard records show the Conception passed its two most recent inspections with no safety violations. Previous customers said the company that owns the vessel, Truth Aquatics, and the captains of its three boats, were very safety conscious.

Authorities have said 21 women and 13 men from 16 to 62 years old appear to have died from smoke inhalation.