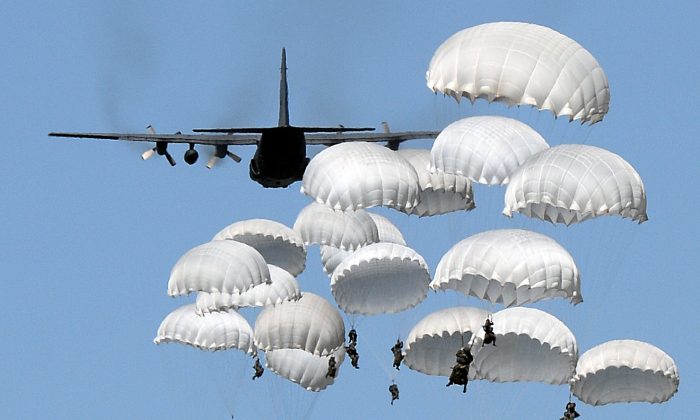 Polish troops land with parachutes at the military compound near Torun, Poland, on June 7, 2016, as part of the NATO Anaconda-16 military exercise. (Janek Skarzynski/AFP/Getty Images)
News

Economic woes encourage aggression on both sides
By Joshua Philipp

Russia warned on Feb. 12 that a “new world war” is starting in Syria. Russian President Vladimir Putin followed this recently by holding military exercises with intercontinental ballistic missile launchers on display. Putin also fired all officers in his naval fleet in the Baltic Sea, allegedly because they refused to confront NATO ships.

On Feb. 10, the United States announced it would double its military training and exercises with partners in Europe “in the face of Russia’s aggression.” More recently, NATO approved plans to send up to 4,000 troops in four battalions to Poland and the Baltic states to counter Russia. And from July 7 to 17, NATO allies are holding their largest military exercises since the end of the Cold War in Poland.

Each side accuses the other of “aggression” and “warmongering,” and each side is trying to one-up the other as they increase military presence and deterrents along the Russian border.

The European Union is no longer formidable to Russia’s ambitions, as it once was.
— Mason Gaffney, economist

The main hot spot of conflict between Russia and NATO is Ukraine—with potential conflicts in the Baltics on the horizon.

Naveed Jamali, author of “How to Catch a Russian Spy” and a senior national security fellow at the Foreign Policy Research Institute, has a broad view of Russian spy operations. He said there has been almost no change in Russian intelligence operations from the Soviet era to today.

He spent four years as a double agent working for the FBI against Russia’s largest foreign intelligence agency, the Main Intelligence Agency (GRU). Also, his parents provided the FBI intelligence on Russian spy efforts for 20 years, while Jamali was growing up.

A key point to understand, he said, is that Russia was always “hugely interested in military intelligence.”

“It wasn’t like the Chinese where they’re trying to steal an engine so they could reverse engineer it,” he said. “It was more trying to understand our military capabilities so that they can counter them, which is more traditional military versus military.”

Of course, for most nations, the goal of intelligence operations is to obtain information on how other countries operate—from the processes of military and diplomatic response, down to times when rush hour is the worst in specific cities. They refer to this as “tactics, techniques, and procedures,” (TTP), and the goal is to understand and predict how an adversary will react to a specific incident.

“When you talk about the rumblings of military aggression, it doesn’t surprise me because I saw them trying to collect that [intelligence on how the West would respond] for 20 years,” Jamali said.

“They’ve always viewed us [the United States] as the main enemy. The Russians I’ve dealt with viewed themselves as behind enemy lines when they were here,” he said, noting that with recent tensions, “I see this as a natural progression of what has been going on for a very long time.”

“Russia sees a vacuum and they’ve always wanted to reclaim the Soviet empire, so why not? With NATO on the ropes and EU on the ropes, who is going to say a thing? It’s a very smart, calculated move, honestly.”

James W. Carden, a contributing writer at The Nation and the executive editor for the American Committee for East-West Accord’s EastWestAccord.com, argues that tensions between NATO and Russia can’t be viewed as a one-sided issue.

With the Ukrainian Civil War, Carden said, “I don’t want to make it sound like Russia has played a very helpful role in all of this,” noting that Russia did take the war as an opportunity for its annexation of Crimea in 2014, but he also questioned, “Have we been helpful?”

Russia has aided pro-Russian forces in Eastern Ukraine, with about one Russian adviser for every three Ukrainian troops, Carden said. But while this fact has been cited heavily to make Russia the aggressor in the conflict, he noted that NATO has been training troops on the other side of the conflict.

Troubled economies in Russia and the West may have made heightened tensions attractive to both parties.

He said the conflict itself can’t be viewed outside of its historical context. Ukraine has a long history of being part of Russia, and Carden said Western and Eastern Ukraine are very different. The West has been, at various stages, part of the Austria-Hungary empire, and the East has leaned more heavily towards Russia.

During his own reporting on the conflict, while in Ukraine, Carden said he does not believe Russia wants Eastern Ukraine in the long term.

He holds a similar view of rumors that Russia wants to take the Baltics. Carden said Russia’s leaders understand the countries are part of NATO and invading them would risk a nuclear war.

From the Russian standpoint, he said, they are being surrounded by NATO forces, and Russia is reacting by placing its own defenses along its own borders.

“There is a severe lack of empathy here,” Carden said, and questioned how most Americans would feel if they were under a similar situation—where a rival coalition of states was placing battalions of troops along its borders.

For Russia, “there is a very real fear,” he said. For the United States, World War II is seen as a distant memory, but in Russia, “it’s living history.”

He said Russia has been doing business with China economically, “but they’re terrified that one day the Chinese will take the Far East,” and they also fear NATO and the United States in the West.

Troubled economies in Russia and the West may have made heightened tensions attractive to both parties.

In 1990, just prior to the collapse of the Soviet Union, economists Fred Harrison and Mason Gaffney were part of a delegation that spent the next 10 years lobbying Russia’s leaders to create a new model of taxation for a free economy.

Harrison, author of “Rent Unmasked,” said their hope was to build a new economic model for Russia, “not just for prosperity, but for peace—because the two are intertwined.” If history had played differently, Harrison said he believes Russia would have “built a free economy that could have been the best in the world.”

But economic reform failed, leaving Russia with “a lopsided society and economy, with a vast upper class and large underclass,” Harrison said.

Harrison believes that Russia’s failed economy has led its leaders to search for a distraction. “Putin has got this problem. He has got to somehow keep social stability on something other than the prosperity of the people of Russia.

“When things get out of hand at home, then you start going for foreign ventures.”

Gaffney, who lobbied Russia alongside Harrison, said that failing economies in Europe have also led to a decline in military strength, which encourages confrontation.

“The European Union is weakening drastically, as symbolized by the Brexit—not to mention the rebellious attitude of the so-called pig [Portugal, Italy, Greece] states—and that of course is part of what encourages Putin to flex his muscles,” Gaffney said.

“The European Union is no longer formidable to Russia’s ambitions, as it once was.”

Harrison also believes this isn’t a one-sided issue, and said that NATO is facing similar issues and may share some blame of its own.

“The Italian banks are utterly bankrupt. Greece is a hostage to this ideology of austerity. So what do you do?” he said. “You say there is a threat on the other side of the border, we better start having NATO exercises, we’d better start equipping our army and get the factories going again.

“Europe relies on gas from Russia. We should be friends with Russia, but here we are rattling sabres.”

The military build-up on both sides of the Russian border is a “lethal cocktail,” Harrison said. “It will take one mistake from one idiot” to put the whole region at risk, he said, similar to the “shot heard round the world” that sparked World War I.