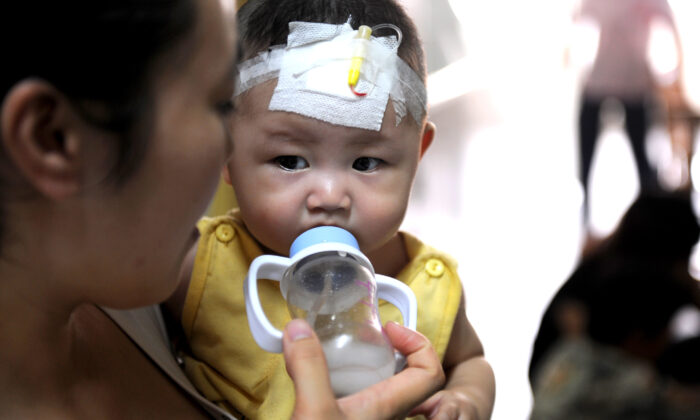 Chinese citizens, impacted by continuous findings of contamination in domestic brands of milk powder, hold a steady dependence on foreign brands. Russia’s Ministry of Agriculture of the Russian Federation stated on Sept. 14 that China imported nearly a quarter of global whole milk powder exports in 2020.

And China’s demand for imported milk powder has continued to soar in 2021. China’s imports of milk powder in the first two quarters of 2021 increased by 34 percent compared to the same period in 2020, and over 90 percent of the volume was supplied from New Zealand, the Russian ministry’s report said.

The report also mentioned that, for global exports of milk powder, butter, and cheese, China imported respectively 13 percent, 9 percent, and 4 percent in 2020.

As early as Aug. 7, 2020, Russia and China have been negotiating exports of Russian dairy products and milk powder to China.

“Dry powder could become a top priority in terms of Russian dairy exports to China,” said Artem Belov, director of the Russian Union of dairy producers Soyuzmoloko, shortly before the negotiations, according to Dairy Global.

Since the COVID-19 pandemic, Chinese demand for dairy products has dramatically increased, due to belief in their “immunity-boosting qualities,”reported South China Morning Post.

China imported 1.31 million tons of milk powder in 2020 to a tune of $8.356 billion, according to data from China’s General Administration of Customs.

Melamine and cyanuric acid absorbed into the bloodstream are known to cause kidney malfunction. According to the U.S. Food and Drug Administration, daily intake of melamine should be lower than 0.063 mg per kilogram of body mass.

Sanlu Group had said that the contaminated milk powder was a problem for only one batch of which about 700 tons was on the market. But after investigation, multiple batches from 22 of China’s 109 dairy companies were found to contain differing amounts of melamine.

According to data from China’s Ministry of Health, 296,000 children were ill for consuming the contaminated milk powder, and 52,898 had been hospitalized as of the end of December 2008.

With the reputation of the state-backed company in tatters, the Chinese lost their trust in domestic brands from then on.

“The Sanlu incident cast a shadow on China-made products. Many parents still want their children to consume milk powder that is imported from abroad” even though it’s been 13 years since the scandal, Yang Yi (a pseudonym), manager of a dairy company in Xi’an, Shaanxi Province, told The Epoch Times.

In recent years, demand for infant milk formula has been flat, while for adult formula and special formula, markets have been growing steadily year after year, reported Chinese finance news outlet East Money.

On May 11, China’s National Bureau of Statistics released the results of its seventh census, reporting that 18.7 percent of the population are aged 60 or above, and 12 million babies were born in 2020. The numbers revealed a shrinking labor force and rapidly aging population, with fertility rates falling to the lowest in seven decades.

Yang said that despite low birth rates, the demands for imported milk powder is still expected to increase, driven by preferences of China-based consumers.

Sanlu Group was not the only China-based company to suffer reputation damage over health problems related to domestic milk powder production.

Early in 2003, an outbreak of “big-headed infants” was first reported in Fuyang, Anhui Province. These babies generally had “big heads and small bodies, weakness, delayed reactions, skin ulcers, and swollen internal organs” after consuming substandard milk powder. Another 229 infants were malnourished, of which 12 died of malnutrition, according to pro-Beijing media Wen Wei Po.

In 2015, three milk producers in Shaanxi province were found to have excessive nitrate levels in some of their powdered milk, the BBC reported at the time.

In May 2020, five parents in Yongxing county of Chenzhou city, Hunan Province, found their children to be suffering from eczema and severe weight loss after consuming a “special medical milk powder” that a doctor had recommended for children who are allergic to milk, reported Hunan Economic TV.