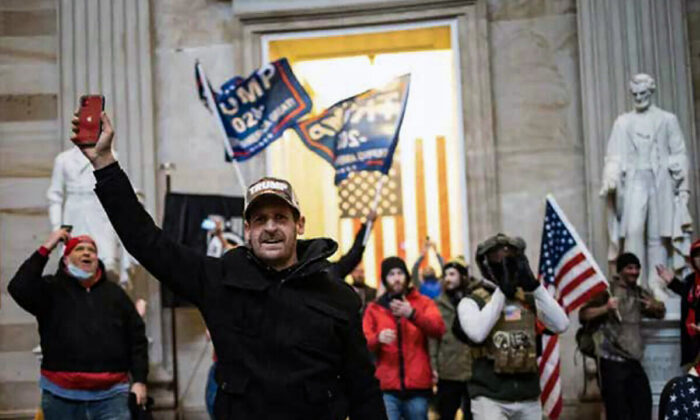 Jeffrey Alexander Smith inside the Capitol on Jan. 6, 2021. He was sentenced to 90 days in jail on a count of parading, demonstrating or picketing. (U.S. Department of Justice/Screenshot via The Epoch Times)
Judiciary

Nearly three out of four District of Columbia residents are likely to find Jan. 6 defendants guilty in federal court, while 85 percent believe the events of Jan. 6 were criminal acts including insurrection, an attack, or a riot, a survey by two defense attorneys found.

Results of the survey by Inlux Research + Analytics were included late April 15 in a change-of-venue motion (pdf) filed by defendants in two Oath Keepers conspiracy cases. The research was commissioned on behalf of Thomas E. Caldwell of Berryville, Virginia, and Connie Meggs of Dunnellon, Florida.

The study is the third recent research project that alleges the pool of potential jurors in the District of Columbia is biased against defendants charged with crimes stemming from unrest at the U.S. Capitol on Jan. 6, 2021.

“The District of Columbia’s jury pool is saturated with prejudice,” said the motion, filed by attorneys David W. Fischer and Juli Z. Haller.

Caldwell, who is charged with seditious conspiracy, conspiracy to obstruct a government proceeding, and three other counts, filed for a change of venue on July 1, 2021. United States District Judge Amit P. Mehta denied the motion without prejudice, ruling that Caldwell “has not put forth a scrap of evidence to support his claims of jury bias.” Caldwell is among five defendants in the Oath Keepers trial set for July 11.

Meggs is charged with conspiracy to obstruct an official proceeding, conspiracy to prevent an officer from discharging any duties, and two other Jan. 6 counts. Her trial is scheduled for Nov. 28.

The motion asks for the Oath Keepers trials to be moved to U.S. District Court for the Eastern District of Virginia in Alexandria. “By doing so, the defendants stand a significantly better chance of being tried before a truly impartial jury,” Fischer and Haller wrote.

The opinion survey found 72 percent of D.C. residents said “they are likely to find defendants guilty—even when given the choice, ‘It’s too early to decide.’” Eighty-five percent characterized events of Jan. 6 “as acts that are criminal in nature,” even when given an option to reserve judgment on the issue.

About seven in 10 respondents said all people who entered the U.S. Capitol on Jan. 6 “planned in advance to do so,” even when given the option to reserve judgment on the question. More than 40 percent said they believe all of the Jan. 6 events “were racially motivated.”

For instance, only 9 percent of D.C. residents said they had not made a prejudicial pre-judgment against Jan. 6 defendants, compared with 51 percent in Florida, 39 percent in North Carolina, and 37 percent in Virginia, the study said.

Slightly more than 28 percent of District of Columbia residents said they have not decided they are more likely to find the defendants guilty, compared with 63 percent in Florida, and 52 percent in North Carolina and Virginia.

About 56 percent of D.C. residents said they do not identify with a group or class of people they believe was targeted by the events of Jan. 6. The figure was 94 percent in Florida, 83 percent in North Carolina, and 82 percent in Virginia, the study said.

Nearly 85 percent of D.C. respondents characterize Jan. 6 as involving insurrection, an attack, or a riot. That compares with 40 percent in Florida, 52 percent in North Carolina, and 57 percent in Virginia.

“The notion that more than 4 out of 10 jurors would assume that J6 was ‘racially motivated’ is disturbing and incorrect,” the motion said. “The defendants should not have to prove that they are not racists.”

The motion cited constant negative news coverage coming from the House of Representatives select committee investigating Jan. 6 as a contributor to the bias. Stories include regular use of the terms “insurrectionists,” “white supremacists,” and “domestic terrorists.”

“Respectfully, the defendants do not agree that J6 was an ‘act of domestic terror,’ a ‘white supremacist attack,’ or an ‘insurrection,’” the document said. “In fact, unlike D.C. residents, most Americans—as the three attached surveys show—believe that J6 was a very large protest that got out of hand and turned into a riot.”

“The non-stop negative publicity requires the court to either grant a lengthy continuance or transfer venue to a federal district that is not as impacted by the Select Committee’s work,” the motion said.

Another contributing factor is incendiary comments made by Attorney General Merrick Garland comparing Jan. 6 to the 1995 terrorist bombing of the Alfred P. Murrah Federal Building in Oklahoma City, the court filing said.

“The majority of potential jurors in the District of Columbia were personally impacted in some way by the events on Capitol Hill on J6,” the motion said. “This factor weighs heavily in favor of transferring the instant cases to the Eastern District of Virginia. D.C. is a city that, as a whole, feels that it has been the victim of a crime.”

Results of the new survey are similar to those found in studies by John Zogby Strategies for a Jan. 6 defendant, and Select Litigation LLC for the Federal Public Defender’s Office in Alexandria, Virginia, Fischer and Haller wrote.

A Virginia trial location would not be a major inconvenience for the court and it would reduce the risk of having to try the cases twice, the attorneys wrote.

“Multiple surveys provide documented proof that substantial prejudice exists in D.C.’s jury pool, and case law suggests that a highly publicized congressional inquiry generating negative headlines against the J6 participants during their trial could be grounds for a mistrial or a new trial on appeal.”