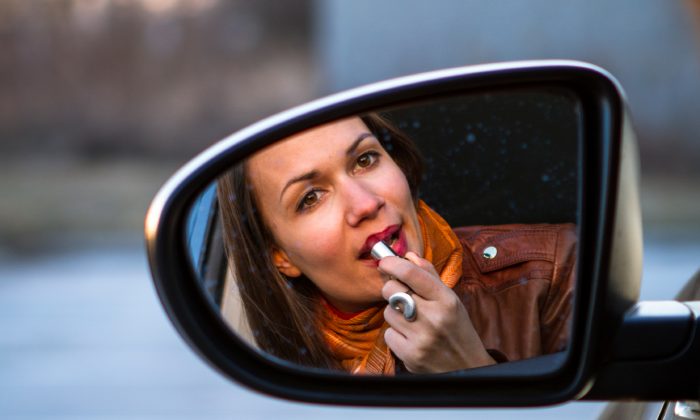 Scientists say that distraction affects our actions differently than our perceptions. (spflaum1/iStock)
Science

What’s more distracting: something overt or something subtle? Experiments show that although obvious distractions dominate perception, less noticeable ones can have a greater effect on action.

What should have been a straightforward psychology experiment at Brown University instead threw researchers a curve: When subjects performed the simple action of reaching toward a target on a computer screen, the trajectory of their hands would bend significantly more toward a visual object that was expected to be a minor distraction on the screen than toward a more significant visual distraction.

These path-bending results are a bit mind-bending. Intuition suggests that more blatant distractions should divert people more, and in many experiments, including ones in the new study published in Current Biology, they do divert people more as they attempt tasks of perception. These kinds of tasks are, for example, akin to finding a friendly face in a crowd.

The Value of Unplugging in the Age of Distraction

But the experimental surprise came about in a task of action—reaching for a target—where distraction has been studied much less. There, the seemingly lesser distractor had more influence.

“It’s a new discovery,” said study senior author Joo-Hyun Song, assistant professor of cognitive, linguistic and psychological sciences and a member of the Brown Institute for Brain Science. “We are figuring out a new phenomenon.”

It’s not at all what Song and her co-authors set out to show, and they acknowledge that they can’t explain it fully.

“We didn’t initially expect to find this,” said lead and corresponding author Jeff Moher, a former postdoctoral researcher in Song’s lab and now a visiting professor at Williams College. “We didn’t predict this.”

Initially, Song, Moher, and co-author Brian Anderson of Johns Hopkins University were simply studying whether people would be distracted in their actions by things that they had been trained to regard as more or less rewarding. Determining this could aid understanding of how things once seen as rewarding, like once-craved cigarettes or alcohol, can continue to bias actions.

To test this, volunteers wearing a device that tracks the movement of their fingers in a training game learned that reaching for one type of circle (for example, the green circles) on a screen was worth 2 cents, while another type (say, the red circles) was worth 10 cents. Then subjects moved on to a task where they needed to reach for a diamond that appeared on the screen at the same time that circles—typically gray, but sometimes either green or red—also appeared.

That surprising finding spawned more experiments, each with completely different sets of volunteers, as the team tried to figure out what was going on. In all, a total of 93 subjects participated in the study.

In one experiment, researchers provided the same reward training as before but instead of tracking subjects’ reach for a target, they tested their accuracy in perceiving the orientation of a line amid various circles, including the red or green distractors once associated with reward. Test subjects had to indicate by pressing the right key on a keyboard whether the line was vertical or horizontal even while the circles of different remembered rewards sometimes appeared on the screen.

Consistent with intuition and prior research, the higher-value distractors reduced the accuracy of the subjects’ perception, as indicated by the key they pressed, more than the lower-value ones did.

The distracting memory of reward seemed to affect perception and action in opposite ways.

In two more experiments, the researchers used color rather than reward to change the magnitude of distraction. In these cases all the objects on the screen were typically red (the diamond target and most of the circles that would appear), except the randomly appearing distractors. Those were either pink (subtly different than red), or blue (quite different than red).

So what happened? In the reaching experiment, the appearance of a pink circle diverted the test subject’s path more than did blue. In the perception experiment (perceiving the orientation of the lines), blue reduced accuracy more than pink.

With color swapped for reward, action was still more vulnerable to subtle distraction than overt distraction, while perception was the opposite.

For purists, the researchers felt that it was worth noting that the roles of diamond and circle were sometimes reversed, just to make sure that shape wasn’t actually a factor in the experiments—it wasn’t.

The team’s working hypothesis is that to prevent distraction from ruining action, the brain employs a suppression mechanism to tune out bigger distractions. Subtle distractions, however, appear to evade that filter. Why?

It will take further research to determine why distraction appears to act differently on the course of action than on the accuracy of perception. Song speculates that perhaps the stakes are generally higher in action than perception, and so perhaps the human brain determines that managing bigger distractions is more important in that context.

“Action may be more important,” Song said. “So if you fail to inhibit strong distractions then the consequences for yourself could be much bigger.”

Finally, the researchers aren’t sure how far the specific actions they studied generalize to other actions. They acknowledge that controlled lab experiments rarely match real-world activities, but at least partial analogies could be drawn to actions such as shooting a basketball, aiming a gun, clicking or tapping in a digital interface, picking defective products off a manufacturing line, or steering a car.

There is no shortage of everyday cases where distraction may affect action in apparently surprising ways.

Brown University and the National Institutes of Health funded the study.