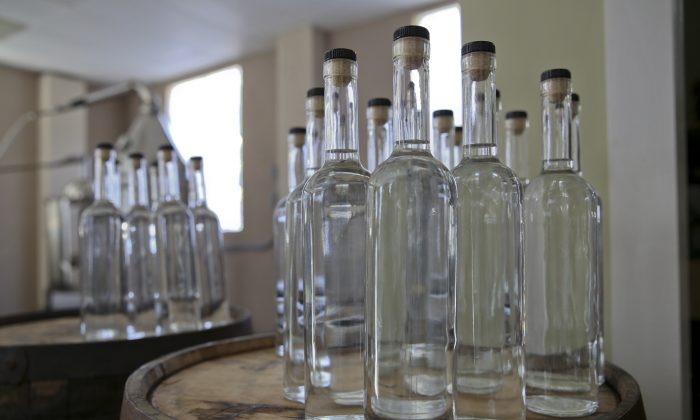 Bottles of white whiskey await their labels at the Franklin County Distilleries in Boones Mill, Va., on Oct. 22, 2015, the first legal distillery, since prohibition, in the town. (Stephanie Klein-Davis/The Roanoke Times via AP)
Life & Tradition

ROCKY MOUNT, Va.—Franklin County has long been known as the moonshine capital of the world. Now, it’s taking advantage of that title.

Two small distilleries—one in Boones Mill and another in Rocky Mount—are paying tribute to the county’s long, and sometimes scandalous, moonshine history. The county’s claim to fame is no longer behind the scenes or discussed in hushed tones. In a few months, it will be proudly displayed on labels.

The two towns are excited to finally have legal stills up and running.

Franklin County Distilleries, in Boones Mill, is owned by Dan Hodges, a physician who splits his time between Roanoke and Lafayette, Louisiana.

It’s a small operation, in a nondescript building without a sign. Hodges said he wants to start small for now, though he said a tasting room could be in the future.

“If you enjoy what you’re doing, you’re not working,” he said.

It’s a long process to get the liquor onto shelves, which probably deters a lot of folks from opening a distillery of their own, Hash said. He’s excited for the day that it’s finally available, which the distillery is still working to determine. Hodges expects it will be on shelves in mid-December.

The high-quality water in Boones Mill will have a positive effect on the liquor. The better the water, the better the drink, Hash said.

Hash said he’ll occasionally sample a bit of his product along the way. “You got to make sure it’s right,” he said. With each run, Hash strives to make it better than the last.

Though the white whiskey could be used in a mixed drink, that’s not what Hash would suggest. “Straight up’s as good as it gets,” he said.

Boones Mill Town Manager Matt Lawless said the distillery is consistent with the vision he and the council have for the town’s redevelopment. Lawless hopes for more restaurants and breweries, and believes a distillery fits right in.

When the distillery published its notice in the local newspaper, as is required by the Virginia Department of Alcoholic Beverage Control, only three people called in response. They were mostly curious, and just wanted to make sure the license wasn’t for a bar, the mayor said.

But folks have nothing to be concerned about. The distillery really just produces “a Virginia agricultural product,” Flora said, with a touch of humor.

There are so many state and federal regulations on the distillery, that it leaves little for the local government to worry about, Lawless said.

Twin Creeks Distillery, based in Rocky Mount, was a close second for the title of first legal distillery in Franklin County since Prohibition.

Chris Prillaman, owner and distiller of Twin Creeks Distillery, said growing up in Ferrum, he’s been around moonshine all his life.

Moonshine is in Prillaman’s blood. Both of his great-grandfathers were in the business—one was even involved in the infamous Conspiracy Trial of 1935.

In Franklin County, moonshine “was just a way of life,” Prillaman said.

Prillaman decided he should open up a distillery of his own after visiting Palmetto Moonshine, South Carolina’s first legal distillery, on a trip to Myrtle Beach.

Twin Creeks produces a variety of liquors, including a peach brandy, a rye whiskey and a “First Sugar” moonshine. The distillery expects the moonshine will be available in stores in January, said Matt Hartberger, sales and marketing team leader for the distillery.

The distillery uses a method that strays from tradition—Twin Creeks steams its products. This method helps them to produce a smoother and more consistent product, which is important when you’re doing it legally, Hartberger said.

The town of Rocky Mount has shown its support to the distillery, Hartberger said.

“They really want finally for the moonshine capital of the world to have a legitimate, legal product,” he said.

“Franklin County—whether people like it or not—has the reputation of producing really great distilled spirits,” said Matt Hankins, Rocky Mount’s assistant town manager. “So now we have somebody that’s going to capitalize on that heritage and that reputation.”

Discussions about opening up a tasting room in Rocky Mount are already in the works. The building that houses the distillery in Rocky Mount can’t accommodate a tasting room, so they’d have to look elsewhere in town. Ideally, they’d like to end up near the Harvester Performance Center, Hartberger said.

Hankins said he has had an initial conversation with Twin Creeks about having a tasting room in town near the Harvester.

He said they’d want to look to other towns, like Marion, to see how they managed to bring liquor into town in a way that doesn’t lead to increases in drunken driving or public drunkenness, or damage community values.

The town is turning its attention more and more to the tourist crowd, Hankins said, and making Rocky Mount a destination.

“This is just one more building block in helping to make that happen,” he said.

Nancy Bell, executive director of the Franklin County United Way, created the nonprofit’s signature fundraising event Shine ‘n Dine, which embraces the county’s moonshine history. This year, Bell is planning a moonshine festival and is excited to have local distilleries participate. She always imagined it as an event that would feature local moonshiners. And now—finally—it can.