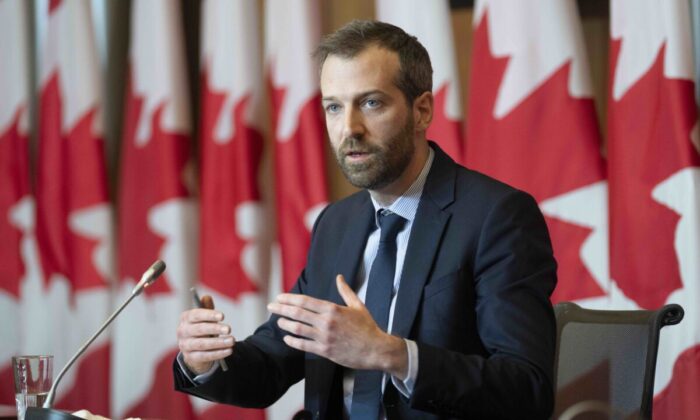 Liberal MP Joël Lightbound speaks about COVID-19 restrictions during a news conference in Ottawa on Feb. 8, 2022, calling on his government to change its divisive tone on the issue. (The Canadian Press/Adrian Wyld)
Viewpoints

We’re Used to Dissenting Tory MPs; When Liberals Dissent, We Should Take Notice

Conservative politicians tend to break ranks and take stances contrary to their own party leadership quite regularly. Toward the end of Erin O’Toole’s tenure as the leader of the Conservative Party of Canada, MPs within his own caucus were speaking out about his leadership constantly. Alberta Premier Jason Kenney can’t seem to make it a day without one of his own caucus members excoriating him in the media. Conservatives by nature don’t sit comfortably and quietly under central leadership when they feel their team is going off course.

When conservatives start publicly fighting with their own party it makes the news, but isn’t unexpected.

When Liberal Party of Canada MPs start speaking out about the prime minister’s actions, though, we need to sit up and take notice. Something big is clearly going on within that party.

Whatever one may think of policies of the Liberal Party, it must be conceded that they are master, partisan political players. They run a tight ship and rarely let caucus dissent leak into the public eye.

But in less than a week we have seen two Liberal MPs publicly condemning Prime Minister Justin Trudeau’s actions and words regarding the pandemic.

Quebec MP Joël Lightbound said, “I can’t help but notice with regret that both the tone and the policies of my government have changed drastically since the last election campaign. It went from a more positive approach to one that stigmatizes and divides people.”

Neither MP said they intended to leave the Liberal Party, which indicates they feel confident that they have a degree of support within their party. When we see two Liberal MPs break ranks like this, we know it is just the tip of the iceberg.

Trudeau’s tone has changed dramatically over the course of the pandemic. In January 2021, he called vaccine mandates “extreme measures that could have divisive impacts.” He went further and acknowledged that there are a broad number of reasons why a person could choose not to be vaccinated.

Toward the end of the last federal election campaign, however, Trudeau labelled the unvaccinated as being “extremists who don’t believe in science, they’re often misogynists, also often racists” during a French-language interview. Quite a deviation from his nuanced and respectful stance earlier in the year.

The Privy Council Office commissioned a “psychographic” poll that concluded the use of pandemic division of citizens could be an effective electoral tool for the Liberals. It appears that Trudeau took the advice of the study to heart and is intent on continuing to use the politics of division now. His rhetoric has been becoming increasingly provocative and offensive as the trucker’s convoy protests continue.

Principled politicians within the Liberal caucus are clearly becoming increasingly uncomfortable with the prime minister’s ongoing campaign to vilify a segment of Canadian citizens. Most people enter politics with a personal vision and ideal to make the world a better place though they differ on the path to getting there. It has to be dismaying to watch your own leader purposely pitching Canadian citizens against each other for the sake of political gain.

Canada has been in a crisis mode for nearly two years now. Citizens want to see a path out of restrictions and towards the normal lives we had enjoyed before we ever heard of COVID-19. We don’t want to see political games being played and we don’t have any appetite to see our fellow citizens singled out and dehumanized by our political leaders. I suspect that many constituents in Liberal ridings feel the same way and have been telling their MPs as much.

While Justin Trudeau may keep surviving elections, he may not be able to withstand pressure from within his own party. We could be seeing the beginning of the end of Trudeau’s time as prime minister.

Trudeau has been leading the Liberal Party for nearly 10 years now. Ambitious party members are surely beginning to chafe under his leadership and want to make their run for the top job before they age out. The only real protection Trudeau had against challengers to his throne was his ability to win elections. Last fall’s electoral stalemate bought him some time, but it may not have saved his hide.

Some Liberal members may see the Conservative Party leadership race as an opportunity to turn over their own leadership to rejuvenate their brand.

Trudeau’s politics of division may well be a desperate effort to stay on top while his internal support crumbles.

Some cracks are finally starting to show in the Liberal machine. Watch closely. It could shatter soon.