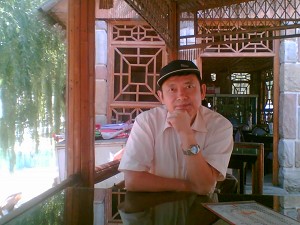 Wang pointed out in the letter that the most urgent issue facing the world's largest nation is to stop the persecution of Falun Gong and provide state compensation for the victims.

This bold statement makes Wang the highest-level Chinese official to publicly step forward in favor of Falun Gong. Falun Gong is a spiritual practice whose millions of adherents currently face imprisonment and torture in China, with many thousands reported as murdered.

In his 40,000-word treatise, Wang talked about various “bombs” that exist in Chinese society. He lists religious persecutions, environmental exhaustion, an over-heating economy, and a real estate bubble ready to burst. His list continues with a lack of military oversight, judicial corruption, media suppression, the Taiwan issue, and the need for extensive political reform, among other items.

Since the publication of Wang's letter in the Chinese editions of The Epoch Times and on numerous websites, he has found growing support inside and outside of China.

In an exclusive interview with The Epoch Times he said, “All the ordinary citizens strongly support me, including many high-level officials of the Chinese Communist Party (CCP.) They actually understand very well in their hearts.”

“The support from all the people shows that we have common needs; it is only that I have spoken out,” said Wang.

Previous high profile critics such as Jia Jia, former General Secretary of the Shanxi Provincial Association of Scientists and Technology Experts, have had to flee China to avoid persecution themselves. Others, such as the attorney Gao Zhisheng, have stayed and were arrested for their writings.

“I absolutely don't care. I am not in fear either. Because what I say represents the voice of ordinary citizens. If the CCP persecutes me, then it is the same as persecuting the citizens of the entire country,” stated a defiant 59-year-old Wang.

“At my age, if I still can't speak the words in my heart, I would feel so weak. The more the CCP wants to strike at or suppress me, the more I will struggle to the end. If the situation is truly as I say it is, then the CCP will expose itself because it is nothing but a gangsterdom.”

Wang Zhaojun thinks political reform is inevitable for China. In his letter he calls on Hu Jintao and Wen Jiabao to begin implementing real political reforms, allow freedom of speech, release all political prisoners, and open the door for overseas democracy activists living in exile to return.

In his open letter, published Oct. 26, 2007, Wang states, “Freedom of belief is a universal value and is regulated in the U.N. Universal Declaration of Human Rights and China's Constitution. However, after the Tiananmen Massacre, in order to continue the one-party dictatorship, Deng Xiaoping's successors listed all non-communist organizations as 'unstable elements' that needed to be 'eliminated before budding.'”

“They made an example of Falun Gong, a popular qigong practice at the time. Those [practitioners] who tried to explain themselves were regarded by the government as highly disrespectful of the authority and would be suppressed using all means. “The suppression of Falun Gong is in fact suppression of all people. It needs to be stopped immediately and victims should be given state compensation,” reads the letter. Wang suggests that the government “send out a representative to talk to Falun Gong and claim criminal liability against the decision makers in the persecution.”

The Chinese authorities are short of support and oversight from the people and lack a counterbalancing force from society. “The current system and regime do not represent the people. If the leaders who impose and exist under this system and regime cannot lead the country to reform, it will be the biggest misfortune,” said Wang.

“I hope there will be a Gorbachev or Yeltsin in China,” concluded Wang, asking for more reformers within the CCP to stand up.

Wang Zhaojun, now 59 years old, was born in Beijing. He was a factory worker, soldier in the People's Liberation Army, and middle-school teacher.

In 1982, he graduated from the former Beijing Electric Power Institute, and went on to establish his own company, Zhaojun Light Industry Research Institute to produce yogurt and Zhaojun Cola. The company also made the first ever “all purpose blown plastic molding machine” in China, which was exported to over 30 countries.

In 1988, Zhaojun Cola won the gold medal at the first Chinese Food Expo. Later the Zhaojun Light Industrial Institute was developed into Anhui Guobao (meaning national treasure) Ltd. Wang, as the company board director, was elected as the member of Anhui Provincial Standing Committee of People's Political Consultative Conference.

In 2002, Wang was selected as the most outstanding private technology entrepreneur in China by the National Industrial and Commercial Federation.

His long standing membership of the Communist Party and high standing in both business and political circles has made his case very complicated for higher officials to handle. At the time of printing, he has still not faced any danger as other outspoken lesser officials have.