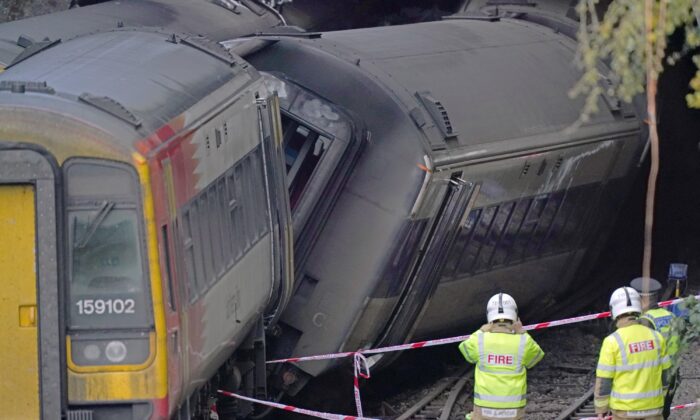 Firefighters at the scene of a crash involving two trains in Salisbury on Oct. 31, 2021. (Steve Parsons/PA)
UK

Disruption following a train crash in Salisbury in Southern England which left several people injured will continue for several days.

National Rail Enquiries said most of the lines serving the Wiltshire city are blocked and “will remain closed until at least the end of the day on Thursday”.

This is affecting Great Western Railway (GWR) services on the route linking Cardiff and Bristol with Portsmouth and Brighton.

Passengers are urged not to travel on the affected parts of the network.

The collision between two trains happened at Fisherton Tunnel, close to London Road in Salisbury, at around 7pm on Sunday.

British Transport Police said the driver of one of the trains was among those taken to hospital.

Network Rail issued a statement around three hours after the crash which said the rear carriage of the 5.08pm GWR service from Portsmouth Harbour to Bristol Temple Meads derailed after “striking an object” on its approach to Salisbury station.

It went on: “The derailment knocked out all of the signalling in the area. Subsequently, the 1720 South Western Railway service from London Waterloo to Honiton then collided with the Bristol train.”

The Government-owned company sent out a new statement on Monday morning which read: “We’ve had lots of contradictory information about what led to the collision last night but all remains wild speculation until the multi-agency investigations establish the facts.

“Experience has shown us from past incidents that information and speculation in the immediate aftermath of an accident rarely proves to stand up to the rigour of the calm and professional investigation that follows.”

After the incident, the derailed train was believed to be on its side, but the SWR train was upright.

Martin Frobisher, Network Rail’s safety and engineering director, said passengers “must have had a really scary experience, and we’re very sorry for that”.

“The Rail Accident Investigation Branch (RAIB) are on site and they’re incredibly thorough in the work that they do.

“And that’ll help us learn from this, and that’s why these events are very rare, because we follow it up very, very carefully, and make sure that we do everything possible to prevent it for the future.”

The driver was trapped after the crash but was released from his cab having sustained injuries that were not believed to be serious, sources confirmed to the PA news agency.

Transport Secretary Grant Shapps tweeted: “My thoughts go out to those affected by the serious rail incident near Salisbury.”

He said the RAIB and Office of Rail and Road will investigate, adding: “We need to understand how this happened to prevent in the future.”

A mother who was out trick or treating with her family nearby likened the noise of the crash to “a bomb” and “thunder”.

Tamar Vellacott said she was walking outside with her young children, mother and partner in Jewell Close, Bishopdown, around a kilometre from the scene.

“It was a noise we’ve never heard before… my young ones started panicking thinking it was a bomb, and we said maybe a lorry had crashed on the London Road and not to panic,” the 25-year-old told PA.

“There was no screeching like brakes, just a long rumbling sound like thunder hitting the railway line.”