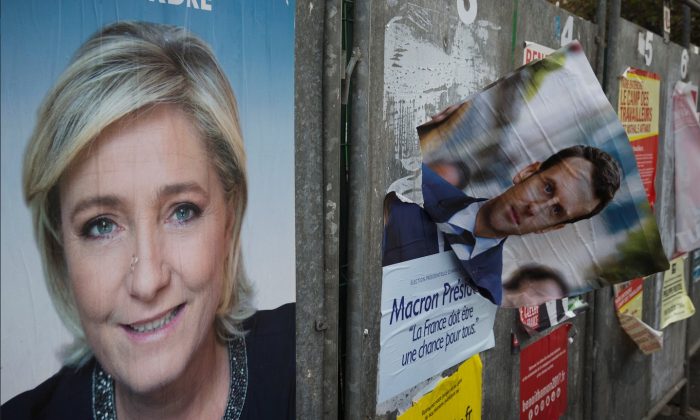 Marine Le Pen, a prominent figure on the political far-right in France, has been cut from the roster of speakers at the tech event Web Summit. Le Pen is featured on a campaign poster in Henin-Beaumont, France on April 24, 2017. (Joel Saget/AFP/Getty Images)
Europe

Marine Le Pen, the former French presidential candidate and leader of the far-right National Rally political party, has been dropped as a speaker at one of Europe’s largest technology conferences.

Web Summit founder Paddy Cosgrave said in an Aug. 15 tweet “based on advice we have received on the large reaction online overnight, her presence is disrespectful, in particular, to our host country.”

Based on advice we have received and the large reaction online overnight, her presence is disrespectful in particular to our host country. It is also disrespectful to some of the many tens of thousands of attendees who join us from around the world.

The Irish tech guru had said in a blog post that “should our hosts in Portugal, the Portuguese government, ask us to cancel Marine Le Pen’s invitation, we will, of course, respect that request and immediately do so.”

It is unclear whether the “advice” Cosgrave cites included an explicit request by Portuguese authorities to ban Le Pen. At the time of writing, Cosgrave hadn’t responded to a question from The Epoch Times about the matter.

Sensitivity to the type of far-right ideas Le Pen espouses runs high in Portugal, which until 1974 was an authoritarian dictatorship.

Since then, politics in Portugal have been a see-saw between socialist and liberal-conservative parties, with a Socialist Party-led left-wing coalition, which includes the far-left Portugese Communist Party, in power since 2015.

Cosgrave earlier defended his choice to include Le Pen and other controversial figures, including those whose views are considered by some to be hate speech.

“The issue of hate, freedom of expression, and platform technologies is one of the defining questions of 2018,” he said. “Web Summit is a place where people should be prepared to have their opinions deeply challenged, and in turn to deeply challenge the opinions of others.

“Excluding those who are ‘too socialist’ or ‘too nationalistic’ or ‘too extreme’ from Web Summit would, I assure you, be a very easy and very pragmatic decision for us to take as a business.”

Citing free-speech forums as a way for extreme ideas to be toppled via open debate, Cosgrave said he was committed to admitting even those viewpoints that are “deeply destructive to society,” which is how he labeled the “libertarian views of Peter Thiel,” who spoke previously at Web Summit.

Corporate tech giants have come under fire recently for restricting access to or shutting down completely communication platforms used by some to spread highly contentious ideas.

The microblogging site said it had asked Jones late on Aug. 14 to delete a tweet that contained a video, which according to a company spokesman, had a segment that is an “incitement to violence.”

The temporary ban means Jones and InfoWars can browse and send direct messages to followers, but wouldn’t be able to tweet, retweet, or like.

Twitter’s rules against abusive behavior say that a user may not engage in the targeted harassment of someone or incite other people to do so.

Cosgrave said in an Aug. 15 tweet “at Web Summit, we are ambitious to be a recognised platform for rigorous debate. In recent years, we’ve added dedicated private and public stages specifically for robust dialogue on contentious and defining issues of our time.”

At Web Summit, we are ambitious to be a recognised platform for rigorous debate. In recent years, we’ve added dedicated private and public stages specifically for robust dialogue on contentious and defining issues of our time. But we’ve still much to learn.

“But we’ve still much to learn,” he added apologetically.

Earlier in the day, he tweeted, “It’s clear to me now that the correct decision for @WebSummit is to rescind Marine Le Pen’s invitation.”

It’s clear to me now that the correct decision for @WebSummit is to rescind Marine Le Pen’s invitation.

Perhaps as a premonition, he prefaced the decision with a caveat in his blog post.