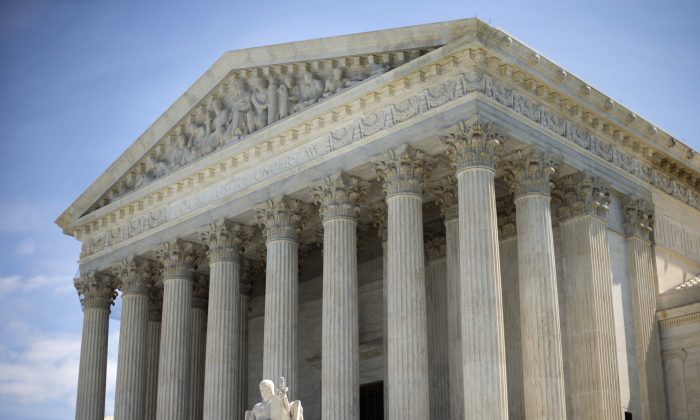 The Supreme Court building is seen in Washington on June 30, 2014. The Supreme Court seems divided over whether Internet search sites can be sued for publishing false information about people if the errors don't cause any real harm. The justices appeared to split along ideological lines Monday during arguments in a case that pits business groups concerned about exposure to costly litigation against consumer protection advocates who want companies held accountable for mistakes. (AP Photo/Pablo Martinez Monsivais)
US

WASHINGTON—No one at the Supreme Court on Monday disputed the fact that an online profile of Thomas Robins was riddled with false and misleading information.

The profile of the Virginia resident compiled by Internet search site Spokeo.com said Robins had a graduate degree, a good job and was married with children. In fact, Robins had no advanced degree and was unemployed, with no wife or children.

But the justices appeared sharply divided along ideological lines over whether Robins can sue the company for a technical violation of the Fair Credit Reporting Act, even if the mistakes didn’t cause him any specific harm such as a lost job opportunity or denial of credit.

The case pits business groups concerned about exposure to costly litigation against consumer protection advocates who say such lawsuits are the only way to hold companies accountable for mistakes.

Robins is pursuing a class action case against Spokeo on behalf of thousands of plaintiffs, which could lead to damages in the billions of dollars.

Liberal justices seemed to side with Robins’ view that being falsely portrayed is enough to show harm. But conservatives insisted the law required Robins to show how he was injured.

“Seems like a concrete injury to me,” Justice Elena Kagan said of the mistakes. “If somebody did it to me, I’d feel harmed.”

Kagan said that Congress passed the fair credit law in the first place because lawmakers were concerned about people being injured by the dissemination of false information.

“I will tell you that I know plenty of single people who look at whether someone who’s proposed to date is married or not,” she said. “So if you’re not married and there’s a report out there saying you are, that’s a potential injury.”

Spokeo lawyer Andrew Pincus argued that Robins’ claims are too speculative and not the kind of “tangible” injury to economic or property rights that Congress intended when it passed the fair credit law.

The law was designed to keep companies from compiling inaccurate information that could jeopardize a person’s ability to get loans or find work. Violators can face damages of $1,000 per violation, but that can climb into the millions in class action cases.

Justice Antonin Scalia said Congress was not focused on faulty information itself, but on the failure of credit reporting agencies to follow proper procedures in collecting and reporting data.

“In fact, Congress has not identified misinformation as a suable harm,” Scalia said.

A lower court ruled that Robins could not sue because the errors were harmless. But a federal appeals court overturned that decision, saying it was enough that Spokeo violated the Fair Credit Reporting Act.

Arguing for Robins, attorney William Consovoy said Congress meant to allow lawsuits for people with a “personal stake” in the publication of inaccurate information.

Chief Justice John Roberts wondered what would happen if a person had an unlisted number and a data company published a phone number that happened to be wrong. Is there still an injury?

Consovoy agreed that would be enough.

But Roberts said the court has historically required an “injury in fact” that seems to be lacking in Robins’ case.

Spokeo’s website allows subscribers to look up personal information about almost anyone. It has a searchable database of profiles that includes addresses, phone numbers, marital status, age, employment information, education and economic health. But the information is collected from a variety of public sources and the company warns that it sometimes contains inaccuracies.

The case is being closely watched by Facebook, Twitter and a host of other technology firms concerned about class action lawsuits that would open them up to billions of dollars of damages for trivial violations of the fair credit law and similar statutes protecting consumer privacy rights.

A decision is expected by the end of June.