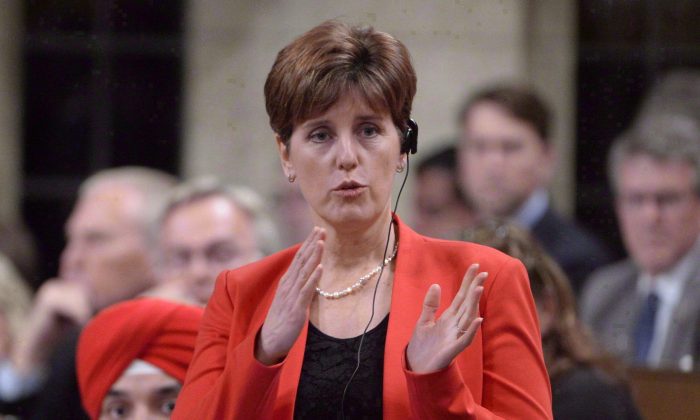 International Development Minister Marie-Claude Bibeau responds during question period in the House of Commons, Dec. 9, 2015. Bibeau says the world must do more to educate children forced from their homes as it grapples with the epic level of humanitarian disaster unfolding across the globe. (The Canadian Press/Adrian Wyld)
Canada

OTTAWA—The world must do more to educate children forced from their homes as it grapples with the epic level of humanitarian disaster unfolding across the globe, says Canada’s development minister.

Marie-Claude Bibeau said Monday, May 23, that too little of the already insufficient amount of global humanitarian assistance is being directed to educate children forced to flee their homes.

Unless more resources are redirected, more children will lose out on education and become drawn to extremism, she said.

“It’s a matter of peace and security,” Bibeau said from the first World Humanitarian Summit in Istanbul.

Bibeau was representing Canada at the first major summit that is trying to reshape the world’s aid architecture to help it better deal with the estimated 125 million people that require humanitarian assistance, including 60 million forced from their homes.

The two-day gathering was an effort to address what the United Nations says is the most pervasive degree of humanitarian disaster since the end of the Second World War.

Despite the soaring needs in places such as Syria and Sub-Saharan Africa, the U.N. faces a $15-billion funding shortfall in humanitarian funding.

Education is definitely needed when we know that refugees and displaced people stay out of their home for an average of 17 years.
— International Development Minister Marie-Claude Bibeau

But of the humanitarian money that is actually being spent, only two percent of it goes towards educating young children, and that’s simply not enough, Bibeau said.

“We have to see it differently,” she said.

“Education is definitely needed when we know that refugees and displaced people stay out of their home for an average of 17 years. We don’t want to lose generations.”

Bibeau highlighted a $274-million Canadian spending announcement, which included contributions to the U.N.’s central emergency response fund, and to the food emergency in Ethiopia that has affected eight million people.

She is currently overseeing a review of Canada’s foreign aid policy that will eventually lead to a five-year plan that is to be presented to cabinet later this year.

The government recently ended the five-year freeze under the previous Conservative government with a modest two-year, $256-million increase in overseas development assistance in the last federal budget.

But the government is under pressure to radically boost Canadian aid spending to meet the U.N. target of 0.7 percent of Gross National Income.

Bibeau has said the government can’t go that far yet because that would involve injecting another $10 billion into Canada’s aid budget, something that simply isn’t affordable at the moment.