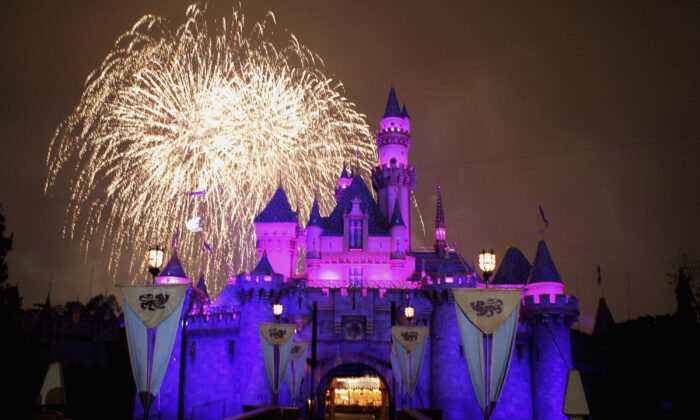 Fireworks explode over The Sleeping Beauty Castle at Disneyland in Anaheim, Calif., on May 4, 2005. (Frazer Harrison/Getty Images)
Southern California

ANAHEIM, Calif.—Disneyland and Disney California Adventure are welcoming back their nighttime spectacular shows this spring, officials announced on Feb. 22.

Disney fanatics should be on the lookout for the Main Street Electrical Parade, Fantasmic!, World of Color, and Disneyland Forever firework shows coming to the theme parks on April 22.

Fantasmic! will be back to celebrate its 30th anniversary at the theme park on May 28. The musical and animated led show that lights up on the waters of the Rivers of America display clips and images from movies such as “Fantasia,” “The Jungle Book,” and “Pirates of the Caribbean.”

Spectators can sit back and enjoy the journey of Mickey Mouse as he battles and conquers the most horrific Disney villains while dreaming.

While “Disneyland Forever” firework show is returning in April, it will only run from Friday through Sunday until returning nightly in the summer. The show occurs at the same time as “Fantasmic!”

“World of Color” will return full-time to California Adventure along will its music, fog, and fire effects. The nighttime show displays beloved Disney and Pixar images accompanied by a water show.

As the electrical parade celebrates its 50th anniversary, spectators can anticipate a grand finale with treasured characters from Disney movies, “Encanto,” “The Jungle Book,” “Raya and the Last Dragon,” “Aladdin,” “Coco,” “Mulan,” “Brave,” and “The Princess and the Frog.”

When the theme park opened its gates back up for visitors on April 30, 2021, amid the COVID-19 pandemic, visitors missed out on a few park gems.

With the parking lot trams officially made a comeback as of Feb. 23 and the nighttime shows will reappear this spring, nightly firework shows are back after being delayed until the last 4th of July, and the first parade didn’t take route until the special Halloween bash beginning in September.