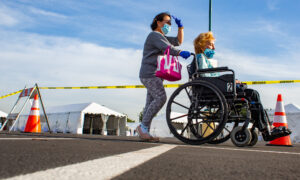 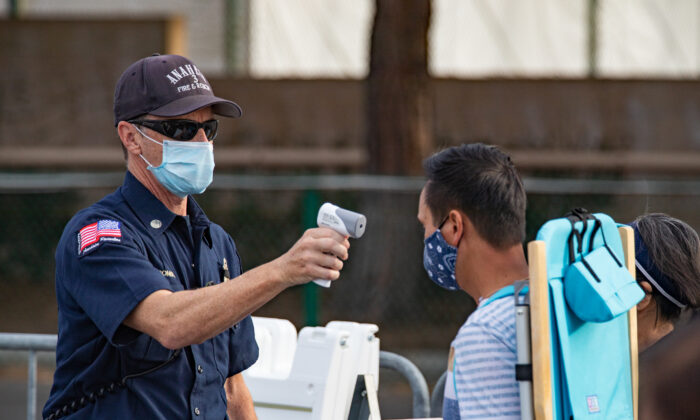 An Anaheim firefighter checks temperatures at a COVID-19 vaccination center set up in a parking area of Disneyland themepark in Anaheim, Calif., on Jan, 13, 2021. (John Fredricks/The Epoch Times)
Southern California

Disneyland Vaccination Site Closes Due to Lack of Supply

Orange County health officials were force to shut a large-scale inoculation hub until at least Feb. 22 due to a delayed shipment of COVID-19 vaccine.

The slowdown was prompted by a massive winter storm that tore through the U.S. Feb. 13 to Feb. 17 and pushed back California’s shipment of the Moderna vaccine.

Without its latest batch of doses, Orange County temporarily closed its Disneyland super point of distribution (POD) because of a lack of supply.

“Without the shipment coming in on Monday, we are essentially out of the Moderna vaccine,” Supervisor Lisa Bartlett told The Epoch Times. “It’s not a significant setback, but every day that we’re not vaccinating residents of Orange County is a definite setback, and it’s a disappointment to all of us.”

The county received about 16,000 doses of the Pfizer vaccine Feb. 18, Bartlett said.

If the Moderna vaccine is delayed beyond Feb. 22, health officials would likely have to solely focus on vaccinating people who need their second shot, since many people are nearing the time when they will need their second dose, Bartlett said.

“Our goal is to never waste a vaccine dose, ever,” she said.

The supervisor also noted that whether vaccines are in transit or whether they are still stuck in manufacturing plants due to inclement weather, there’s low risk of them becoming compromised.

“If they can’t even get out of the manufacturing plant, then they’re stored safely on site,” she said. “Once the product is ready for transport, it’s very much in a safeguarded situation where it’s at the appropriate refrigerated temperatures.”

Supervisor Doug Chaffee told The Epoch Times that people who have received their first shot do not need to be concerned about receiving their booster shot.

“We will still be able to give the second shot timely, once we get the expected supplies in,” he said Feb. 19. “So, it’s a matter of postponing, people are disappointed…but we’re trying to contact them and get them a new appointment in a timely way.”

Disneyland is not the only site that could be affected; the Anaheim Convention Center site, which was set to open Feb. 24, may also be delayed depending on when Moderna vaccines arrive.

Soka University will remain open to administer second shots for the time being based on vaccine supply, Chaffee said, adding that there is a bit more of the Pfizer vaccine supply than Moderna.

“We are keeping our mobile PODs going, they don’t take that much of the supply,” Chaffee said. “And they’re reaching out to some of the more hard-hit areas that we need to get to. A typical mobile POD will do only 500 shots in a day, so we are going to continue those. The bigger sites that can do thousands, they have to be postponed until we receive more vaccines.”

Residents who were set to receive their vaccine at a now-closed site can reschedule their appointments through Othena, the county’s vaccination app and website.