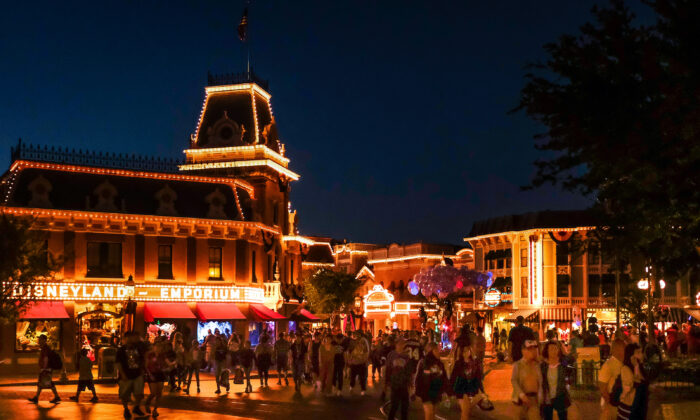 Packaged in a purple rectangular box, the Magic Key box holds a Disney lanyard, button, sticker, pin, and map of the theme park.

Passholders anticipated receiving their Magic Key boxes in the mail shortly after their annual pass purchase. However, many passholders are still checking their mailboxes, waiting for the package to arrive.

Lawrence bought four annual passes for her and her family in August. She purchased the Imagine Key annual pass, which is available for Southern California residents only.

All annual passes for the theme park allow entry for specific calendar days, discounts on theme park shopping, and a Magic Key box package with goods to show off the annual pass status.

“I was so excited to receive the package,” Mendoza told The Epoch Times via email. “There was some goodies in the package, but my favorite is the pin. I think it was a cute idea of Disney to send these packages to their magic key holders.”

While some passholders waited in anticipation for the Magic Key box, others didn’t mind the months of delay.

“I already have my pass,” Andrew Gomez told The Epoch Times. “The boxes don’t mean anything to me.”

Gomez just received his box a week ago after purchasing his annual pass in August. However, he doesn’t foresee using the goods.

Despite the delay, those who purchased their passes by Oct. 30, are expected to receive a Magic Key box, according to Disneyland Magic Key’s Instagram page.

The continued lookout for the Magic Key boxes comes nearly a week after Disney announced the sell-out of the Believe Key annual pass prior to selling out of the Dream Key in October.