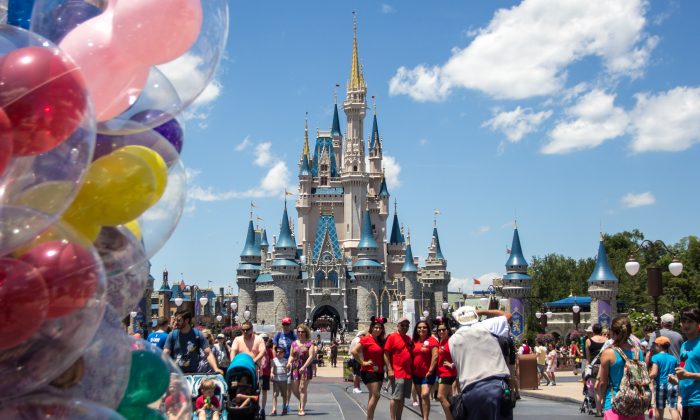 The Cinderella Castle at Disney's Magic Kingdom in Orlando, Fla., on May 22, 2016. (Benjamin Chasteen/Epoch Times)
US

But it stipulated, “Special events, such as Mickey’s Not So Scary Halloween Party, will also take place. Water Parks will remain closed tomorrow and will reopen later this week.”

The Walt Disney website WDWMagic.com reported that “damage appears minimal” at the park. “The full extent of the damage won’t be known until the post-storm teams evaluate the situation. Previously, Animal Kingdom’s landscape was hit particularly hard,” the site says.

As CNN noted, Irma hit Disney World from 1 a.m. to 3 a.m. on Monday. The National Weather Service said Orlando and outlying areas experienced winds up to 58 mph and gusts up to 78 mph.

Universal, located near Disney World, said on its website that the storm damage sustained Monday was “relatively minor.”

Residents head back to wrecked homes

On Monday, Florida residents came back to homes that were smashed during Irma’s onslaught.

Downgraded to a tropical storm early on Monday, Irma had ranked as one of the most powerful Atlantic hurricanes recorded. It cut power to millions of people and ripped roofs off homes as it hit a wide swath of Florida on Sunday and Monday and moved into neighboring states, Reuters reported.

Authorities said the storm had killed 39 people in the Caribbean and one in Florida—a man found dead in a pickup truck that had crashed into a tree in high winds on the Florida Keys over the weekend.

With sustained winds of up to 60 mph, Irma had crossed into Georgia and was located about 47 miles (76 km)northeast of the Florida state capital Tallahassee, the National Hurricane Center said at 2 p.m. ET.

High winds snapped power lines and left about 7.3 million homes and businesses without power in Florida and elsewhere in the U.S. Southeast, state officials and utilities said. They said it could take weeks to complete repairs.