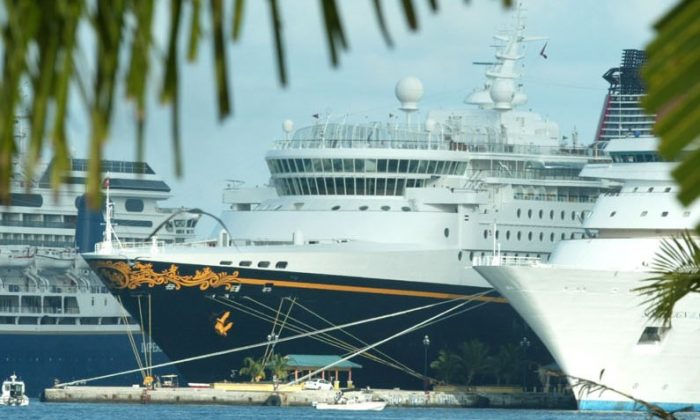 The Disney Wonder cruise ship is shown in Nassau Harbor in the Bahamas, Friday, Dec. 27, 2002. (AP Photo/Tim Aylen)
US

An ailment of unknown origins struck 131 passengers and 14 crew members aboard the Disney Wonder cruise ship that embarked from Miami on April 27 for Bahamas and returned on May 1.

The illness caused diarrhea and vomiting in almost 1 in 20 of the 2,680 passengers, the Center for Disease Control and Prevention (CDC) reported.

A CDC Vessel Sanitation Program environmental health officer boarded the ship upon arrival in the port of Miami on May 1 to conduct an environmental health assessment and evaluate the outbreak and response activities. Stool specimens collected from the passengers and crew were sent to CDC for testing.

The crew increased cleaning and disinfection procedures in response to the outbreak, including continuous cleaning of handrails, a Disney Cruise Line spokeswoman told DailyMail.com

CDC reports about 9-12 gastrointestinal illness outbreaks aboard cruise ships every year. That is an improvement upon a decade ago when it used to be more than 20 a year. More than 11 million passengers embarked on cruises from the United States in 2014 as part of the North American cruise industry, according to Statista.com. Meanwhile, the outbreaks struck 1,612 passengers in the same year, less than 0.02 of a percent, according to the CDC.

Disney Cruise Line ships have not had an outbreak like this since 2002, when 13 passengers aboard Disney Magic came down with a gastrointestinal illness.

One notable case in recent years happened aboard the Royal Caribbean Cruise Line ship Explorer of the Seas. During its January 2014 cruise, 689 people contracted the norovirus causing vomiting and diarrhea. More than one in five of the 3,000-plus passengers fell sick.

First US Cruise Ship Docks in Havana, Cuba, After Decades of Tense Relations