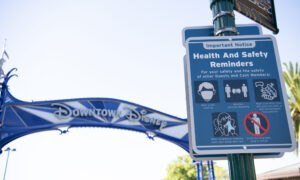 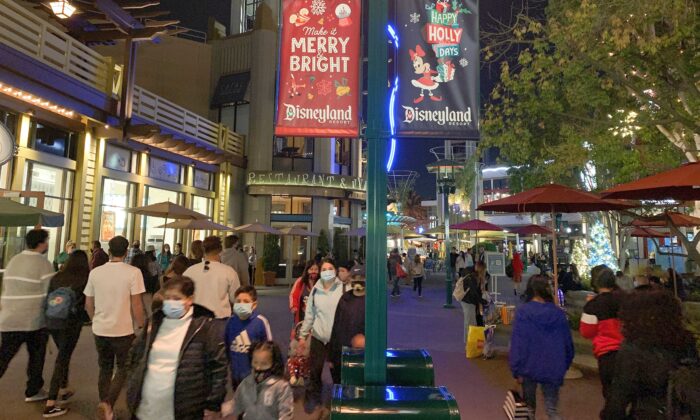 People visit Disneyland where parts of the park opened for more retail and dining as an extension of the Downtown Disney District in Anaheim, Calif., on Nov. 19, 2020. (Frederic J. Brown/AFP via Getty Images)
Southern California

ANAHEIM—With the state clearing a path for theme parks to reopen at limited capacity, Walt Disney Co. CEO Bob Chapek announced March 9 the company plans to reopen the Disneyland Resort in Anaheim by late April, and thousands of furloughed workers will be recalled to be trained on new safety standards.

“Here in California, we’re encouraged by the positive trends we’re seeing and we’re hopeful they’ll continue to improve and we’ll be able to reopen our parks to guests with limited capacity by late April— we look forward to publicizing an opening date in the coming weeks,” Chapek said.

State health officials announced last week that theme parks can reopen beginning April 1 in counties that have reached the “red” tier of the state’s four-level Blueprint for a Safer Economy. Orange County is currently in the most-restrictive “purple” tier, but it is expected to advance to the “red” tier as early as next week.

Chapek said despite the fact Disneyland and California Adventure could potentially reopen at the beginning of April, “the fact is it will take some time to get them ready for our guests.” That preparation includes “recalling more than 10,000 furloughed cast [employees] and retraining them to be able to operate according to the state of California’s new requirements.”

“I am pleased to say the response has been great thus far, our cast members are excited to get back to work,” Chapek said. “And this is also good news for the Anaheim community, which depends on Disneyland for jobs and business generated by visitors.”

When the parks reopen, they will do so under strict capacity limits.

While Orange County is in the “red” tier, the parks will be limited to 15 percent of overall capacity. When the county advances to the “orange” tier, capacity will be increased to 25 percent, and in the least-restrictive “yellow” tier, capacity of 35 percent will be allowed.

Only in-state visitors will be allowed at the theme parks.