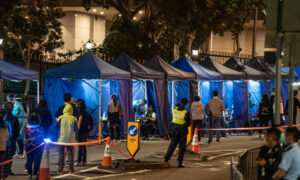 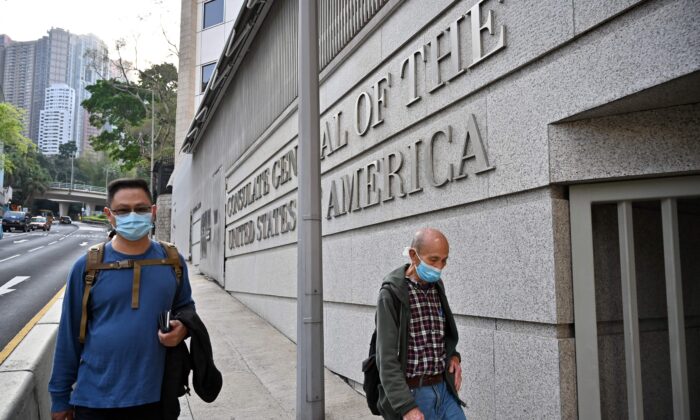 The Chinese state-run media were printing “disinformation” about US diplomats in accusing them of not following quarantine rules, the U.S. State Department said on March 15.

The employees, a couple aged 40 and 41 respectively, have been sent to the hospital for isolation, according to the city’s health authorities. The two’s infection prompted Washington to temporarily close its consulate in Hong Kong for “deep disinfection and cleaning” on March 15.

While the Hong Kong government said that the consulate “has been fully cooperative,” Chinese state-run media have capitalized on the news, propagating reports that the two invoked diplomatic immunity to evade quarantine rules.

DotDotNews, a pro-CCP news portal, citing unnamed government sources, said the two refused to quarantine and were still “roaming around the residential neighborhood and going to work at the U.S. consulate, bringing tremendous risk to the outbreak control efforts.”

The report was soon picked up by Chinese news portals, with Global Times, a hawkish state-controlled newspaper, accusing the officials of being guilty of “irresponsible” and “arrogant outlaw behavior.” Takungpao, another pro-Beijing newspaper, said that the consular employees were “spreading poison everywhere.”

The Hong Kong Federation of Trade Unions, the city’s largest pro-Beijing labor force, also held a small protest outside the U.S. consulate. Four people held up banners with the words “No prerogative, No excuse,” and “Strongly condemn the virus-spreading behavior that disregards public morality.”

“When it comes to disinformation about these two not complying to quarantine, that is absolutely false,” she said.

A State Department spokesperson told The Epoch Times that all consular employees “who were physically present at the consulate for more than two consecutive hours over the past two weeks” will be taking a virus test in accordance with Hong Kong government mandates.

“The U.S. Department of State has no greater priority than the safety and security of U.S. citizens overseas and our locally employed staff,” the spokesperson said in an email.

The U.S. Consulate General in Hong Kong and Macau confirmed in a Facebook post that “the employees in question do not work in offices that interact with the public,” adding that the diplomatic officials have “abided by all Hong Kong government requirements for the arrival, testing, and quarantine of all diplomatic personnel and their family members” since the pandemic began.

“We reject these efforts to spread disinformation about a critical public health issue,” the consulate said in a statement.

The consulate has canceled all scheduled services for U.S. citizens and visa applicants through March 19, the State Department spokesperson said.

Hong Kong leader Carrie Lam, at a Tuesday press conference, said that officials have allowed the couple’s two daughters to reunite with their parents in the hospital rather than sending them to a quarantine facility. She said the reason was because of their exceptional family circumstances and not their status as consular personnel, adding that one of the children had also tested positive.