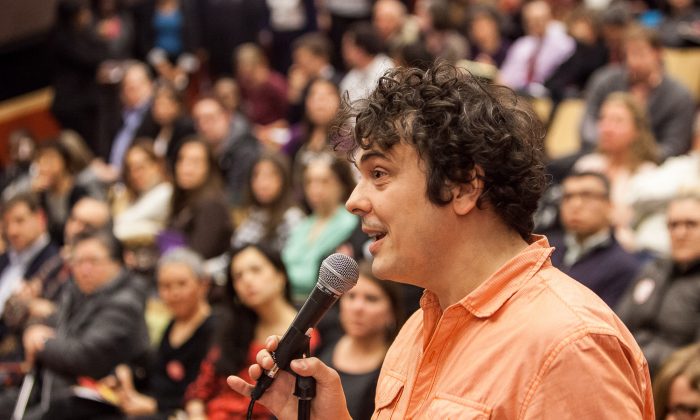 Disillusioned With Standardized Tests, Some Parents Opt Out

NEW YORK—In April of this year Marco Battistella and other parents from the Earth School gathered to discuss whether to opt their children out from the new, standardized Common Core-aligned tests.

In New York state, the Common Core tests were first administered in 2013 in grades three to eight. This spring, the tests will expand to high school. The tests are tied to the Common Core learning standards, adopted by 45 states and the District of Columbia in exchange for a total of more than $4 billion from a federal grant program called “Race to the Top.”

In March, Battistella started to ponder whether his child’s education is on the right track. He was concerned about the tests, and he saw the test-prep as “effectively killing education.”

Children learn, that “the most likely answer is C,” Battistella said, and that whenever an answer includes certain phrases, it’s a sign it’s not the correct one.

“They are taught tricks that are probably good to pass the test but have completely nothing to do with learning,” Battistella said. “I’m very fortunate, because the Earth School is not a school that spends much resources and time on test prep. That was not going to last … unless we took a stand.”

When he was sure opting out was the way to go, Battistella inquired about the repercussions. He wondered if without test scores his child would not be promoted to the next grade.

According to the city’s Department of Education (DOE) regulations, if a student doesn’t complete the standardized tests, the school should do a portfolio assessment instead. The portfolio is made up of a student’s work over the course of a year. The portfolio is then evaluated by the child’s teacher, the principal, and then the district superintendent. The superintendent then determines whether the child would be promoted to the next grade.

“We encourage every student to take state tests because it’s important for their academic development,” said Harry Hartfield, a spokesman for the DOE, responding to an email inquiry. “Teachers and schools are better able to tailor teaching and individualize learning with data from these tests.”

Having a fourth-grader at the time, Battistella faced an additional challenge of finding a middle school for his daughter Maya. He called every middle school in his district to find out if his child would be accepted without a test score.

Some schools were surprised to hear his request, some understood him, and all knew what to do. Schools routinely accept children without standardized test scores, such as those transferring from private schools that administer their own tests.

“Ultimately, there was no problem,” Battistella said. “All schools pretty much agreed that what they care about is attendance.”

Middle schools also look at what a child’s teacher has to say.

“Typically, teachers write letters and make comments and explain how the child is,” Battistella said.

Battistella also didn’t want to get his daughter’s school in trouble. A federal provision asks for at least 95 percent participation in the tests. If a school fails to hit the mark, it won’t make its Adequate Yearly Progress (AYP) requirement.

AYP is required by the federal No Child Left Behind Act. If a school from a low-income area doesn’t meet the AYP requirement for two years in a row, it has to allocate part of its federal funding for transportation, allowing students to attend other schools, or for tutoring.

Such schools can also be labeled by DOE as in need of intervention, which could mean additional paperwork for the school. But the DOE website states that “no intervention would ever be made solely on the basis of the state test participation rate.”

According to the DOE, 320 students refused the standardized tests in 2013. At the Earth School, 51 of 150 students eligible for the Common Core tests didn’t participate.

“To tell you the truth, the 99 remaining … We weren’t able to reach them,” Battistella said. “We will find out this year how many of those would like to participate.”

Next year, Battistella will opt his child out again.