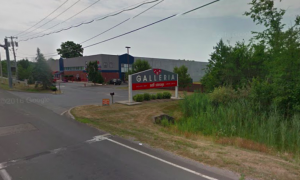 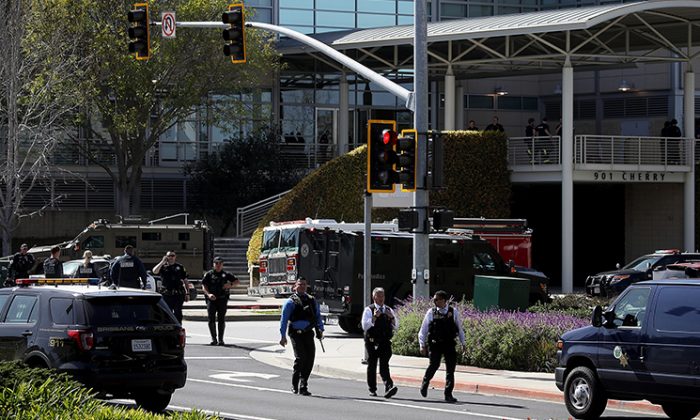 Police walk outside of the YouTube headquarters in San Bruno, California on April 3, 2018. (Justin Sullivan/Getty Images)
US News

A 39-year-old woman, apparently upset about YouTube’s policies, shot up the video hosting company’s offices in San Bruno, California, on April 3 before shooting herself.

Nasim Najafi Aghdam, a resident of San Diego, came onto the YouTube campus and opened fire seemingly at random with a 9-mm handgun, which she later turned on herself.

“It is believed the suspect was upset with the policies and practices of YouTube,” San Bruno Police Chief Ed Barberini told the Washington Post. “This appears to be the motive for this incident.”

“At this time there is no evidence that the shooter knew the victims of this shooting or that individuals were specifically targeted,” said a statement issued by the department.

Three people were treated for gunshot wounds, and one for a twisted ankle sustained while fleeing the scene.

Two of the shooting victims have been released from Zuckerberg San Francisco General Hospital. The third was still in critical condition on the morning of April 4.

According to the Post, Aghdam frequently posted videos about veganism, fitness, and animal abuse.

Todd Sherman, a YouTube project manager, described the assault in a series of tweets sent while he was leaving the YouTube campus in an Uber ride-share car.

Sherman started by telling his followers that he was safe. He followed that by describing people rushing down the building’s halls towards the exits as sounding like an earthquake.

We were sitting in a meeting and then we heard people running because it was rumbling the floor. First thought was earthquake. https://t.co/gmolQmRXm1

Sherman had no idea why people were running but he could tell that something serious was happening.

After existing the room we still didn’t know what was going on but more people were running. Seemed serious and not like a drill.

Then someone told him there was a person with a gun on the YouTube campus.

Sherman related that after he heard there was a shooter on the campus, he was scared to see people running by, because any one of them could have been the shooter.

At that point every new person I saw was a potential shooter. Someone else said that the person shot out the back doors and then shot themselves.

As he left the building, Sherman said he saw blood pooling on the floor. He watched police cruisers rushing towards the campus and unloading officers armed with rifles.

I looked down and saw blood drips on the floor and stairs. Peaked around for threats and then we headed downstairs and out the front.

Police cruisers pull up, hopped out with rifles ready and I told them where the situation was as I headed down the street to meet up with a couple team members.

Another employee, Vadim Lavrusik, decided not to join the throngs fleeing. Instead, he and some coworkers barricaded themselves in an office.

Active shooter at YouTube HQ. Heard shots and saw people running while at my desk. Now barricaded inside a room with coworkers.

Lavrusik was able to escape unharmed.

Safe. Got evacuated it. Outside now.