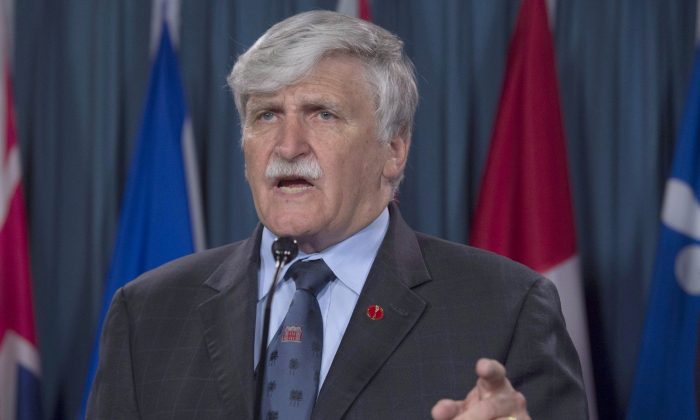 Former senator Romeo Dallaire speaks about torture in Syria during a news conference on Parliament Hill on May 31, 2016. (The Canadian Press/Adrian Wyld)
Canada

OTTAWA—Anthony Lake was in a Syrian hospital a few months ago watching surgery being performed on a sniper victim, whose age he could not determine because of the severity of the injuries.

Lake, the executive director of the United Nations Children’s Fund, watched the doctors pluck pieces of the patient’s jawbone out of his shattered face using what he called “old instruments” in a setting he described as “sort of an operating room.”

Lake was shown the anaesthetic that was being used—its best-before date was several years ago.

“It’s an outrage,” the head of UNICEF said in an exclusive interview with The Canadian Press by telephone from his New York City office.

“Badly, in a word,” is how Lake described the way things are currently going in Syria.

Dallaire said the world needs to strike a peace agreement with teeth to end the five-year-old Syrian civil war.

That sense of outrage echoed on Parliament Hill on Tuesday, May 31, when retired Canadian general and former senator Romeo Dallaire said the Rwandan genocide is being repeated right now in Syria and the world isn’t doing enough to stop it.

Dallaire was part of a delegation that displayed some of the 55,000 forensic photos that depict atrocities committed against civilians in Syrian prisons by the regime of President Bashar Assad. The photos were smuggled out of Syria and depict torture on men, women, and children.

“Through pictures, through scenes, we hope to bring to the attention of parliamentarians and Canadians the true suffering of human beings that are caught in the middle of this maelstrom that we are fiddling with, instead of trying to reconcile,” Dallaire said.

Lake, meanwhile, painted a vivid portrait of what he saw first-hand in Syria on his most recent trip there. Prior to entering the hospital, he visited a school where he saw marginal progress over his previous visit there—the children who he had seen studying underground to avoid snipers had moved up a floor.

Still, he was forced to ask himself: “Who the hell would shoot children through the window of a school?”

Dallaire said the world needs to strike a peace agreement with teeth to end the five-year-old Syrian civil war, which has displaced millions and left hundreds of thousands dead.

He commanded the failed U.N. peacekeeping mission in Rwanda and has since campaigned tirelessly for conflict prevention as a senator and now as a senior fellow of the Montreal Institute for Genocide and Human Rights Studies.

Dallaire said he has personally witnessed a repeat of the recruitment of child soldiers to the Syria conflict in refugee camps in Jordan, a phenomenon of the 1994 Rwandan genocide that left hundreds of thousands dead.

“When a society uses children as cannon fodder for a desperate cause like that, it is a disgrace to humanity and we are part of letting that disgrace perpetuate itself,” he said.

Naomi Kikoler, deputy director of Simon-Skjodt Center for the Prevention of Genocide in Washington, said the smuggled photos show the degree of human suffering that is currently taking place, in real time, in Syria.

“Our hope in doing so is to try to do for the Syrian people what was not done for the Jews during the Second World War, which is to shed a light on their suffering and urge that others take action to prevent and protect these communities from the crimes that are happening,” she said.

Mouaz Moustafa, the executive director of the Syrian Emergency Task Force, lauded Canada for taking in Syrian refugees, but called on the government to push for “creative solutions” to end the torture and air bombardment of civilians.

“I truly believe this is the never-again moment of our lifetime.”

Moustafa said dozens were killed and many others were injured in another bombing of a hospital earlier this week.

Lake saw evidence of a similar atrocity on his recent trip to Syria. After he left the school and made his way to the hospital where he saw the emergency surgery, he surveyed the surrounding area as he stepped out of his car.

He could see no sign of damage around the hospital, although the building itself had been bombed.

“So,” he concluded, “it was clear it had been targeted.”