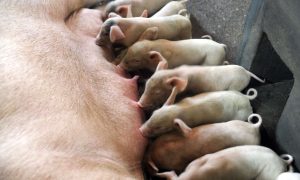 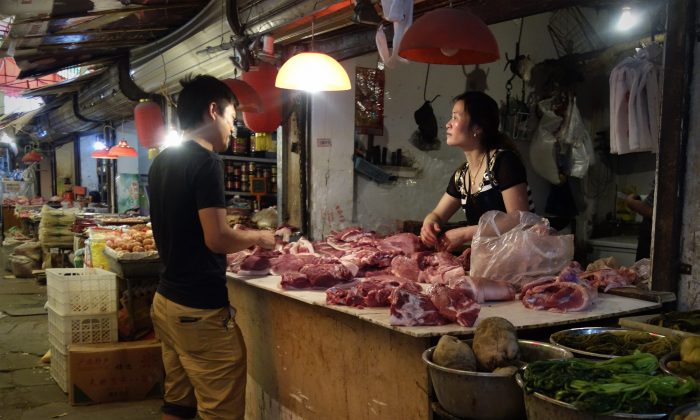 In this picture taken on June 1, 2013 a man (R) browses meat at a shop selling pork in Beijing. An abattoir in Beijing was recently found to have been selling diseased meet to high schools for over a year. (Wang Zhao/AFP/Getty Images)
China

Diseased Pig Meat Was Sold to Schools in China

An illegal abattoir in China sold diseased pork to high schools around the country for over a year, according to prosecutors in Beijing, which brought the case to the public recently when they brought charges against the owner of the establishment.

Beijing police discovered the slaughtering site in September of last year. The owner, Lu Jiangyong, had been selling to restaurants and universities meat so diseased that it could have made many ill.

According to Caijing, a business magazine in China, the facility was in a secluded location in Houzhuang Village of Liangxiang County, in Beijing. When investigators went there the place was permeated with a heavy stench: rotting pig meat, skin, lard, and organs were heaped together. Organs had turned black inside plastic bags, investigators said; a laboratory in Beijing later showed that the meat was diseased.

Lu said that the diseased pigs were delivered to him directly, but he did not know where the sellers got them.

Pork supplied by Lu’s company was served to students at the Wai Feng restaurant at Beijing University of Posts and Telecommunications from May 2012.

Cafeterias at colleges and universities usually have high standards of food safety and use a strict inspection system to verify every food ingredient, but they failed to catch the diseased product this time.

“These certificates are often used repeatedly, and few people would pay attention to them, including market management staff and restaurant operators,” a police officer dealing with the case told Caijing.

Li Honghe, a pork seller from the same village as Lu Jiangyong, started buying from Lu in 2012 because of his low prices. He estimated that he made a profit of about 20 thousand yuan from the pork, since it costs about 4 yuan per pound through regular channels, but Lu sold it for nearly 3 yuan per pound.

Li also purchased pork through regular channels, and used those certificates to pass off his diseased product. Most markets and restaurants do not bother to check to see if the certificates match up with the product itself.

Chinese authorities claim to monitor the production of pork every step along the process: from breeding, to slaughtering, to processing, and selling—regulatory authorities, animal inspectors, health inspectors, and food and drug supervisors are supposed to monitor each step.

In reality though, that often does not happen. Caijing pointed out that in this case, not a single regulator caught the illegal slaughterhouse.