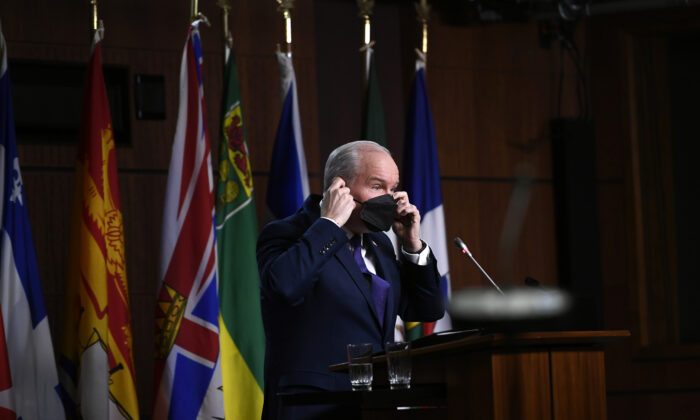 Conservative Leader Erin O'Toole replaces his mask at the end of a news conference responding to the federal government’s COVID-19 response, on Parliament Hill in Ottawa on Jan. 6, 2022. (The Canadian Press/Justin Tang)
Canada

Conservative Leader Erin O’Toole says he is opposed to Quebec’s plan to tax residents who refuse COVID-19 vaccination, while other Conservative politicians are also speaking out against the controversial penalty.

O’Toole stated his position on Quebec Premier François Legault’s proposal during a Facebook Live event on Jan. 13, calling it unfair and predicting that it won’t persuade vaccine-hesitant Quebecers to finally roll up their sleeves.

Earlier this week, Legault announced plans to impose a “significant” financial penalty on unvaccinated adults who don’t have a medical exemption. He said on Jan. 13 that a bill will be introduced in the province’s National Assembly early in February so all political parties “will be ale to vote either for or against and propose adjustments, if necessary.”

According to official data, 85 percent of Quebec’s population have received at least one dose of COVID-19 vaccine.

As well as O’Toole, Alberta Premier Jason Kenney, Manitoba Premier Heather Stefanson, and Saskatchewan Premier Scott Moe all ruled out the possibility of introducing a similar penalty for unvaccinated residents of their provinces earlier this week. Ontario Chief Medical Officer of Health Dr. Kieran Moore also said that he won’t recommend a similar “punitive” tax on the unvaccinated.

“The scapegoating of the “unvaccinated” gets worse by the day. This tax will do nothing to keep anyone safe,” tweeted St. Albert-Edmonton MP Michael Cooper.

The Canadian Civil Liberties Association (CCLA) said in a statement issued on Jan. 12 that the proposed tax on the unvaccinated “raises significant equity concerns.”

“We know that some of those who remain unvaccinated are individuals who face serious barriers to accessing health care, and many have a low level of trust in the system because of negative experiences in the past,” said Cara Zwibel, acting general counsel for the CCLA.

“This is a divisive measure that will end up punishing and alienating those who may be most in need of public health supports and services.”

Conservative MP Mark Strahl applauded the CCLA’s condemnation of the “shameful policy,” while noting that Canada’s charter “recognizes individual autonomy over our bodies and medical decisions.”

On Jan. 13, the Justice Centre for Constitutional Freedoms announced that it will launch legal action against Quebec for the “planned health tax,” which it says violates the Charter of Rights and Freedoms.

“The proposed Quebec ‘health tax’ is an egregious violation of the Charter rights of Quebecers and an affront to equality which Canada was, in times past, known for,” states Justice Centre president John Carpay.

Prime Minister Justin Trudeau said on Jan. 12  that he would need more details about Quebec’s plan before saying whether he would support it. The following day he said the province has indicated the plan will be in line with the principles of the Canada Health Act, which guarantees universal health-care access to Canadians.