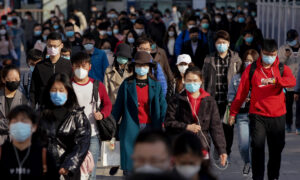 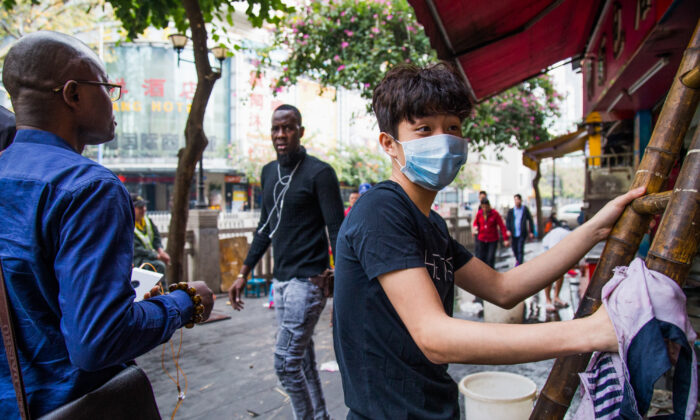 Abuse and racism against Africans in southern China amid pandemic fears have spurred backlash in their home countries, leading to diplomatic tensions.

Having claimed success in suppressing the pathogen, China over the past month has announced few local infections, instead highlighting imported cases, although research studies, accounts from locals, and internal documents have challenged the authenticity of the official data.

Guangzhou, an industrial hub in southern Guangdong Province and home to one of Asia’s largest African populations, has been on edge after several infections were reported among African migrants.

Africans soon found themselves to be the targets of virus-related discrimination.

Videos posted on social media showed Africans being forced out of their hotels after proprietors feared that they could potentially carry the virus, refused service at restaurants and shops, and were subject to passport seizures and mandatory quarantines. Some had to sleep on the streets.

In one video, a group of African nationals was seen pulling their luggage on the streets after having been chased out of their residences.

Another, captioned, “this is the treatment black people in China get now,” captured two men in suits stopping a young black woman from entering a shopping center. “Only us?” The woman asked, before asking a Caucasian customer to try. Gesturing with his hands, one of the men signaled that the latter could go in while the black woman was not welcome.

Again, for those who still doubt that Black people and particularly #AfricansinChina are being targeted we feel it is our duty to share this. A sign at a @McDonalds restaurant seems to make this perfectly clear pic.twitter.com/FaveKrdQHi

A McDonald’s chain in Guangzhou recently displayed a notice stating that “black people are not allowed to enter the restaurant.” The fast-food giant’s China branch later apologized on its official Weibo social media account and said it suspended the outlet on April 12 for a half-day training.

In a residential community in Guangdong Province, a sign dated April 5 instructed landlords to contact black tenants and ask them to leave, saying that the community will no longer allow entry of foreigners, “especially blacks.”

While virus-fueled xenophobia has been on the rise around the globe, the cases are generally isolated, while in China, the same kind of racism is playing out at the governmental level, according to Anders Corr, a policy analyst and the publisher of the “Journal of Political Risk.”

“This is the Chinese version of reality: they’ve claimed that they didn’t have any more cases, that they had defeated the disease, the pandemic, in their own country. And so, logically any new cases in China must be coming from ‘outside,’” Corr said.

Around 86,475 foreign nationals lived in Guangzhou in the past year, 13,652 of whom were of African descent, the city’s mayor said on April 12.

The regime has barred entry to most foreign nationals since late March.

Tensions escalated in Guangzhou after a cluster of 16 cases broke out among African residents, in the district known as Little Africa, on April 7. Officials then mandated Africans to undergo testing followed by quarantine at their own expense, whether or not they have the virus.

More than 4,550 Africans in Guangzhou have been subject to mass testing since early April, and at least 111 have tested positive, according to the mayor.

Corr said Chinese authorities’ racism demonstrates that China is not a safe place to do business.

“What China is doing is really shooting itself in its own foot because people are looking at this and realizing that China’s not really a safe place to go, it’s not a safe place to do business … if you look like anything other than a Han Chinese [the ethnic majority],” Corr said.

Zhou, a Guangzhou local, told The Epoch Times that an African couple running a restaurant within a mile from his village were both infected with the virus.

“Now Africans can get arrested by the police whenever they appear on the street,” he said in an interview.

Asita Awovie, a Nigerian currently studying civil engineering at the Chang’an University in China’s Shaanxi Province, is planning to return home after less than a year in the country.

“My parents are worried because they think it is not safe living here anymore,” he told The Epoch Times. “The situation in my region is fair and the university tried to keep us safe but as for me, I don’t actually trust China again.”

The Chinese regime is one of Africa’s biggest creditors, having loaned African nations around $143 billion between 2000 to 2017, according to research by Johns Hopkins University. By 2018, around a fifth of the continent’s external debt was owed to China, according to the U.K.-based advocacy group Jubilee Debt Campaign (pdf).

Yet the decades-long relationship with African countries now faces challenges in the aftermath of the racist incidents in Guangzhou.

Anozie Maduabuchi Cyril, consul-general of the Nigerian consulate in Guangzhou, lashed out at Chinese officials for the unfair treatment, noting that the Nigerian government did not single out Chinese while handling the outbreak in Nigeria.

“If you seize a Nigerian passport, it’s like you’re seizing Nigeria as a whole,” he said in a video that has since gone viral.

Nigerian House Speaker Femi Gbajabiamila also summoned the Chinese ambassador on April 10 for a meeting. He showed a video clip of alleged abuse in China and pressed the Chinese official for an explanation.

“It’s almost undiplomatic the way I’m talking, but it’s because I’m upset about what’s going on,” he said.

The Sierra Leone Embassy in China, in an April 10 notice, said representatives of African ambassadors have met with Chinese foreign ministry officials to protest the citizens’ “disturbing and humiliating experiences,” and reminded the Chinese side of African support.

Faced with international pressure, the Chinese government maintained that it has “zero tolerance for discrimination.” Chinese foreign ministry spokesperson Zhao Lijian, during an April 12 press briefing, said “China and Africa are good friends, partners, and brothers.”

The U.S. consulate issued an alert on April 13 advising African-Americans to “avoid the Guangzhou metropolitan area until further notice,” due to authorities’ suspicion that they may have contact with African nationals.

“The abuse and mistreatment of Africans living and working in China is a sad reminder of how hollow the PRC [People’s Republic of China]-Africa partnership really is,” a State Department spokesperson said on April 11.

“At a time when we should be supporting one another to recover from a pandemic, PRC officials recklessly hid from the world, Chinese officials are busy evicting African students into the streets without food or shelter,” it added.

Toluwani Eniola contributed to this report.