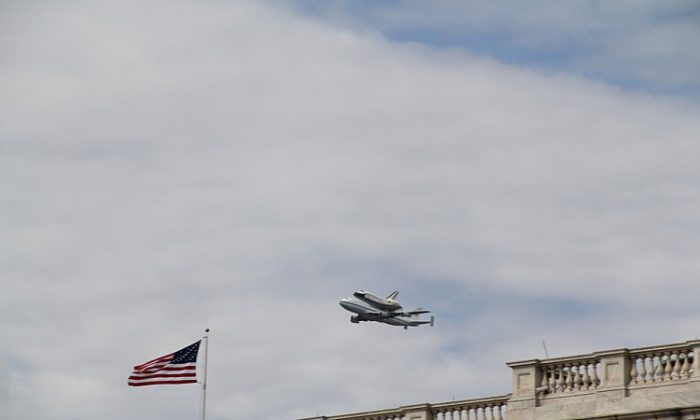 It was a significant moment, even in a place like Washington D.C. All eyes were turned to the sky as crowds gathered atop buildings, on street corners, and on the steps of Congress, to see the U.S. space shuttle Discovery on its last flight, Tuesday, April 17.

There were shouts of “There it is!” and “OMG, look at that!”—and then a respectful hush as the historic carrier graced the city, sweeping right at the Washington Monument and continuing up the National Mall, before gliding over the U.S. Capitol and disappearing behind the nation’s Supreme Court.

Flying at around 1,500 feet and attached to the specially modified 747 Shuttle Carrier Aircraft (SCA), which has been stripped of any superfluous weight but will still burn through twice the fuel with the shuttle in tow, Discovery completed three circuits of the nation’s capital before touching down for the last time at Dulles International Airport, 11:05 a.m.

Even atop NASA’s gigantic SCA, Discovery was no less diminished as she headed to retirement at the Smithsonian’s National Air and Space Museum’s Udvar-Hazy annex, which is housed at Dulles Airport.

The winged aircraft will replace the test shuttle Enterprise, which has been housed at the Dulles annex since 1985. The Enterprise will move to New York where it will go on display at the Intrepid Sea, Air & Space Museum. A similar flyover will announce the Enterprise’s arrival in New York next week.

In her 27 years of service, Discovery has flown 39 missions into space, more missions than any other shuttle. It was Discovery that carried the Hubble Space Telescope into orbit and sent the Ulysses robotic probe on its mission to the sun.

The flyover marks the end of an era for NASA’s 30-year space shuttle program. The final space shuttle mission ended in July 2011, when Atlantis made its final stop at its home port, NASA’s Kennedy Space Center in Florida.

Atlantis will remain in Florida, destined for a specially designed 65,000-square-foot exhibit, presently under construction at the Kennedy Space Shuttle Plaza.

Meanwhile, New York and Los Angeles will be the beneficiaries of similar flyovers to that of the Discovery, as they receive their own space shuttles for exhibit.

The Enterprise will fly at “a relatively low altitude” right over New York City, including the Statue of Liberty and surrounding metropolitan areas, according to a statement from NASA. The time, weather permitting, will be between 9:30 and 11:30 a.m., on Monday, April 23.

Following the flyover, the Enterprise will then be “demated” from the 747 and transported by barge and tugboat up the Hudson River to the Intrepid Sea, Air & Space Museum for exhibit by June.

The museum is to date working on a permanent exhibit facility to showcase Enterprise, according to the NASA statement.

Meanwhile, the Endeavor is to make its way from Florida’s Kennedy Space Center to Los Angeles, atop a similar SCA 747 to arrive in the City of Angels around fall. Following a flyover, the Endeavor will be transported through city streets to its eventual home in the California Science Center in Exposition Park.