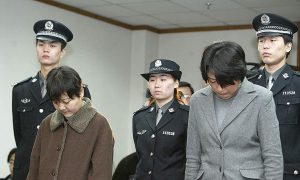 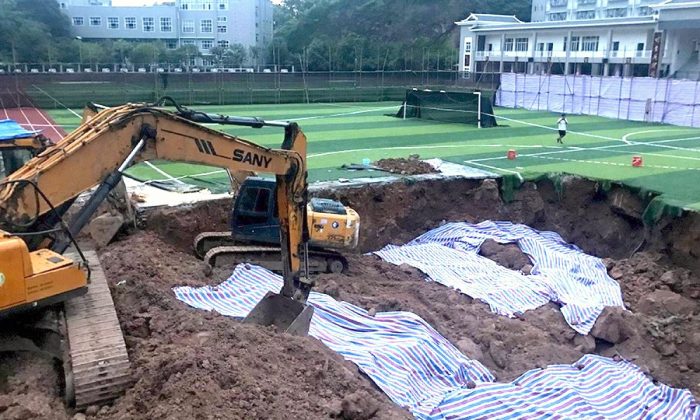 The body of Deng Shiping was found on June 19 buried under a school playground 16 years after her disappeared. (Weibo)
China Society

The discovery of a faculty member’s body under a school playground in China 16 years after he went missing has thrown into the spotlight claims of a potential cover-up by local authorities.

Police in the city of Huaihua in south-central China’s Hunan Province confirmed on June 23 that the body found buried under the playground at Xinhuang No. 1 Middle School on June 19 was that of Deng Shiping, a school faculty member who went missing in January 2003, according to local media.

Deng, the school’s project supervisor, disappeared after he refused to approve substandard works in the construction of a playground, reports said. The project had been contracted to Du Shaoping, who was also the principal’s nephew.

Du admitted on June 20 to murdering the 53-year-old and burying his body under the playground.

The case has made headlines in China, exposing allegations by Deng’s family that authorities failed to investigate his disappearance due to the suspects’ close ties to local government officials.

After Deng’s disappearance, his family told police they suspected he had been killed by Du and buried under the playground, according to a recent appeal by Deng’s family to reopen the case.

Deng, had refused to sign off on the project in 2003, saying the walls were substandard.

The 53-year-old was last seen in the company of Du, the family said.

Despite requests by Deng’s family, the authorities never investigated the disappearance, and never questioned Du about it.

In April, Du and several other people were taken into custody in connection with being members of a criminal organization, amid a crackdown on organized crime.

During this time, one of the arrested members told police that Du had ordered him to carry Deng’s body to the playground in 2003.

Police started digging up the school’s playground on June 18, and found a man’s body the next day, according to Chinese media. The body was confirmed to be that of Deng’s on June 23.

In an earlier appeal to reopen the case, Deng’s family alleged that local authorities had formed a “protective net” to obstruct investigations of Du.

Authorities’ inaction, Deng’s family said, was a result of the influence of Du’s uncle, Huang Bingsong, the school’s principal, who allegedly had numerous connections with local government officials.

Huang’s wife, brother-in-law, and cousin all held leadership positions in the local county government, and his brother worked at Huaihua City’s economic commission, according to Deng’s family.

In the morning following Deng’s disappearance, Huang was seen directing workers to bulldoze earth on the construction site in a suspected attempt to bury Deng’s body, Deng’s family said.

Deng’s family said they were once told by a local prosecutor that Huang had accumulated considerable social connections from his decade-long tenure as the school’s principal.

“He even has a good relationship with the attorney general,” the appeal quoted the prosecutor as saying.

“We dare not to help you, and you probably won’t be able to find any evidence in Xinhuang county [given his powerful influence].”

Police have since arrested several suspects in connection with Deng’s murder, while the county government has placed Huang under investigation on suspicion of “serious violation of the law,” Chinese media reported on June 23.

The case has caught widespread attention across China, with many netizens commenting that the case was emblematic of systemic corruption occurring across all levels of government.

Deng’s son, Deng Lanbing, who was 15 years old when his father went missing, said on China’s Twitter-like Weibo on June 23 that he was tremendously saddened upon hearing the news of the body’s discovery.

“For the past 16 years, he had been lying under the icy playground, and no one knew—or even if anyone knew, no one was able to redress the injustice he had endured,” Deng Lanbing wrote.