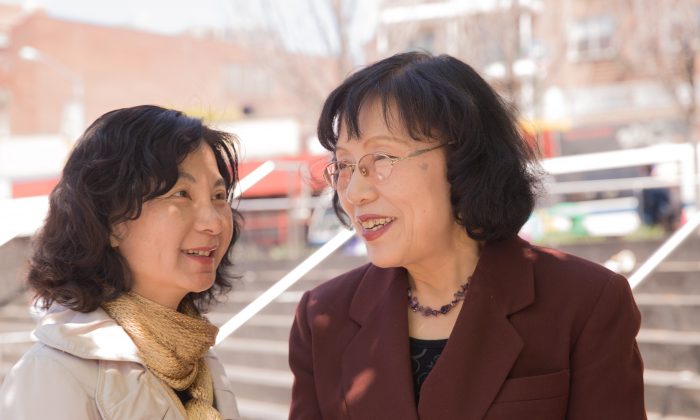 Meditation and Transformation in China

In 1998, Zhang Yijie, a bureau chief in what is now the Ministry of Commerce, was putting copies of “Zhuan Falun,” the main text of the Chinese spiritual practice Falun Gong, into the pigeon holes of the top leaders of her workplace—among the most powerful officials in China.

A year later, the book was illegal.

And a few years after that, in 2001, Zhang was personally singled out for torture by Li Lanqing, then-director of the 610 Office, the fearsome Party agency set up to persecute Falun Gong.

That Falun Gong would eventually become “public enemy No. 1” was far from the mind of Zhang during the 1990s. The practice, a school of meditation and moral discipline that comes from China’s ancient tradition of self-cultivation practices, was freely spread in China, and Zhang for years taught the exercise movements to hundreds of government staff in the basement of her office building.

At around the same time, Mi Ruijin, a military medical researcher who retired with the rank of captain, and another stalwart of the establishment, was traveling around the country with Falun Gong’s founder, Master Li Hongzhi, manning the auditorium door and selling tickets to his lecture events, which by then were attracting thousands.

Falun Gong’s simple moral teachings—that the purpose of human life lies not in the joys of this world, but in following the values of truthfulness, compassion, and tolerance—had a radical impact on those who encountered them.

The moral pull of Falun Gong’s teachings became an irresistible force for these two women, and tens of millions of others. The Chinese regime’s sports administration estimated in the late 1990s that there were 70 million Falun Gong practitioners in China. Falun Gong sources said that by 1999 more than 100 million had taken up the practice. The discipline had spread almost entirely through word of mouth.

Nothing like it had been taught during the crowded qigong scene of the 1980s, where masters instead focused on the extraordinary abilities they said their practices could develop. Qigong is a generic name for these Chinese disciplines, like taiji, that combine slow moving exercises and teachings.

The two women, both from families deeply embedded in the Communist Party system, saw Falun Gong grow from anonymity to widespread popularity. In the persecution that began in 1999, both fled the country, eventually rekindling an acquaintance in the United States from more than a decade prior in China.

The practice took root exceptionally quickly, given that it was first taught to the public on May 13, 1992, to about 180 people at the Changchun No. 5 Middle School in northeastern China’s Jilin Province.

The day is now called Falun Dafa Day, and is celebrated by Falun Gong communities around the world as both the day Falun Dafa was first publicly spread and as the founder Li Hongzhi’s birthday.

The second lecture that Li held, also in Changchun, saw 250 people attend. Toward the end of the year Li began teaching in Beijing, holding a total of 13 classes (a 14th was planned, but public security authorities, finding that the events had become too popular, forced venues to cancel.) Classes often went for over a week—nine days became the typical format. The book of Falun Gong, “Zhuan Falun,” was later compiled based on the content of these lectures.

It was during these classes in Beijing that Mi Ruijin encountered Falun Gong. Her older sister attended the first Beijing class, and exhorted Mi to go along. She went to the fifth, and never looked back. Mi and her older sister were called “little Mi” and “big Mi” respectively in the Beijing Falun Gong community at the time.

“When I went to the first class, when he talked about prehistoric culture, I felt it. I knew that this thing was what I had been looking for the whole time. I experienced a happiness I cannot express in words,” Mi said, during a recent interview in Flushing, Queens, where she lives.

Changes in her body quickly followed, she said. “Since my early 20s, I could not handle the cold. I used to wear layers of down and still feel a deep chill. By the third day of the Falun Gong classes, that had vanished. I was so happy, excited, and surprised that I cannot explain it.”

Falun Gong theory says that the bodies of those who cultivate the discipline are cleansed of illness so that they can develop spiritually.

“Chinese and Westerners have different cultures and thoughts,” Mi said, when it was remarked to her that many modern people would find that idea difficult to believe. “Chinese people believe all this, and have been through it. There have always been people in folk circles with abilities. There were many people in the 1980s. There has always been cultivation practice and reverence for Buddha. But whether Western people will believe it, I cannot say.”

Mi spent the next several years traveling around the country with a small group of Falun Gong practitioners and Master Li, where she said they invariably lived in budget hotels, ate simple meals, and charged 30 yuan (about $5) for tickets to Li’s lectures.

Her introduction to qigong had taken place years ago, when the celebrity master Yan Xin stayed in her parents’ home for over a week. She also studied the “Book of Changes,” and a range of other practices. “But it wasn’t what I was looking for,” she said.

Falun Gong, she said, “explained everything very clearly, including where humans come from, where they’re going, and what the purpose of life is.”

She said that Falun Gong taught her that there is a higher, truer reality than the one we experience daily, and that access to it can be attained only through adherence to the principles of truthfulness, compassion, and tolerance.

“I felt that a window had opened in my heart, my whole body was open and comfortable. When I read those few words, I knew what this is, that this is what I’ve been looking for, and nothing else.”

Zhang Yijie, who used to work for what is now the Ministry of Commerce, reported a similar sense of enchantment at the seriousness of moral purpose in Falun Gong’s teachings—and of the suddenness in which it appeared in her life, and transformed it.

“I had a high-ranking husband, a beautiful daughter, and a great job. My whole life was so smooth. But I felt a sense of emptiness, loss, and listlessness inside,” she said, reflecting on her spiritual journey more than two decades later.

“When I obtained the Fa”—this is the phrase Falun Gong practitioners often use to describe their encounter with Falun Gong’s teachings—”I understood that the suffering I had for so long was because I was looking for it. When I read ‘Zhuan Falun’ for the first time, my whole life was rocked to the core.”

Zhang cried at several points during the interview, as she described the psychological process by which she came to recognize and embrace the teachings of Falun Gong. “I knew my life had found its home and resting place. After I practiced, my thinking and perspective on humanity, the cosmos, and the life before me, all changed,” she said.

The first understanding Zhang said she came to was that “everything in the human world,” and in particular position and wealth (“gongminglilu,” in Chinese), were ultimately, deeply empty. “When I truly understood that I could relinquish these things, I experienced the joy from that, that unlimited joy, a kind of happiness that has no explanation or expression. A joy from the heart.”

She rattled off a series of examples of how this manifested in her daily life. The first, for instance, was that she immediately let go of the frustration she had experienced having remained as a deputy bureau chief for seven years, while watching the family members and incompetent flunkies of higher-level officials sail ahead of her in the workplace.

As the secretary to Chen Muhua (who later became vice chairwoman of China), Zhang also traveled across China, meeting delegations and holding meetings. She was given gifts ceaselessly: officials in Guangxi lavished a jade bracelet from Burma; another group furnished a deep sea pearl necklace; a Hong Kong-based group of Chinese presented an early edition of the Walkman, worth thousands of yuan. These were the perks of the job. “I refused all these gifts,” she said.

On other occasions, when it was impossible to return the gifts, she would hand them in at headquarters. Asked whether such behavior would be seen as suspicious—the equivalent of New York cop Frank Serpico refusing a cut from a shaken down drug dealer—she said that her colleagues eventually got used to it. And with a rapidly growing number of Falun Gong practitioners in China, such behavior was seen as less and less strange.

The Chinese Communist Party did its best to destroy this when it embarked on the anti-Falun Gong campaign beginning on July 20, 1999. Falun Gong was said to be sinister and dangerous, and those who practiced it uneducated and stupid.

Zhang was sent to 18 months of re-education through forced labor, personally ordered by the head of the 610 Office, she said. She refused to sign a document slandering Falun Gong, and 10 more months was added to her sentence. Zhang has penned long essays describing in detail the torture she experienced while in custody.

Her husband, whom she does not identify, was also locked up and forcibly subjected to intensive anti-Falun Gong propaganda—24 hour videos at high volume were common. Then he was forced to divorce his wife, and his career was stifled.

The persecution quickly swept through the country. Peaceful people in all parts of the country and from all walks of life found that the Party considered them a most dangerous enemy.

Minghui, a Falun Gong website, has documented nearly 4,000 torture deaths in custody since the beginning of the campaign, although, because of the difficulty in getting information out of China, the true number of deaths is believed to be far higher.

Reported methods of torture include burning with cigarette butts, blunt trauma, poisonings, beatings to paralysis, electric shocks, and dozens more. The United Nations special rapporteur on extrajudicial killings wrote in 2004 that “the cruelty and brutality of these alleged acts of torture defy description.”

Researchers have for years said that the persecution led to the use of Falun Gong practitioners as a living organ bank, ready to be used by military hospitals and prisons. At least 60,000 adherents are believed to have had their organs harvested in this fashion, the surgical procedure becoming the form of execution.

Considerations of commercialized, modern day genocide are always prominent in the Falun Gong community. But in New York City later this month, Zhang Yijie and Mi Ruijin will be putting them aside, at least temporarily, as they march in a Falun Gong parade, listen to their fellow practitioners share their experiences at a conference that attracts thousands, and take in the musicianship of others at an open air concert that celebrates Falun Gong’s positive impact on the lives of those who practice it, 23 years, to the day, after it was first taught to the public.