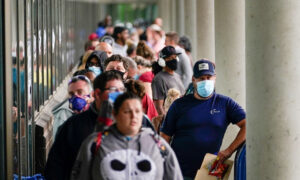 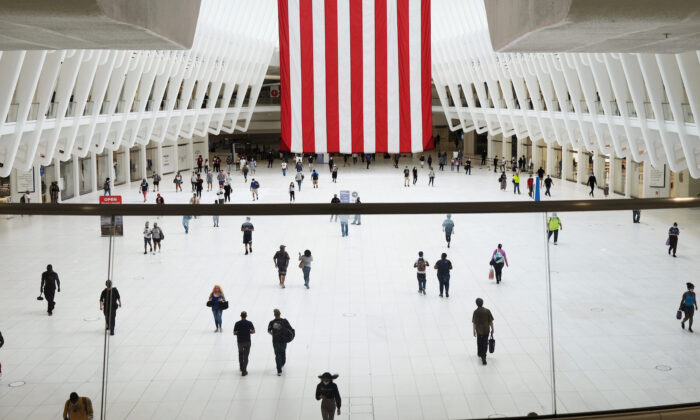 People walk through the Oculus transportation hub and mall on the first day of the reopening of malls to the public for shopping since the outbreak of COVID-19, in New York City, on Sept. 09, 2020. (Spencer Platt/Getty Images)
Economy

Century 21, a discount department store chain with locations in New York, New Jersey, Pennsylvania, and Florida, has filed for Chapter 11 bankruptcy protection and is closing all of its remaining 13 stores, according to an announcement.

The company said in a press release Thursday that its decision stemmed from insurance providers declining to pay a business interruption claim filed by Century 21 in the wake of the losses it has suffered due to the Chinese Communist Party (CCP) virus outbreak.

“The decision follows nonpayment by the Company’s insurance providers of approximately $175 million due under policies put in place to protect against losses stemming from business interruption such as that experienced as a direct result of the COVID-19 pandemic,” the company said in the release.

Raymond Gindi, co-CEO of Century 21, said the company weathered an earlier crisis thanks, in part, to an insurance payout, which was not forthcoming this time.

“While insurance money helped us to rebuild after suffering the devastating impact of 9/11, we now have no viable alternative but to begin the closure of our beloved family business because our insurers, to whom we have paid significant premiums every year for protection against unforeseen circumstances like we are experiencing today, have turned their backs on us at this most critical time,” Gindi said in the release.

Century 21 said it has a pending lawsuit in New York against several of its insurance providers for refusing to compensate the company for its losses, which the company adding that it will be moving that lawsuit to the bankruptcy court.

Following the SARS scare of the early 2000s, insurance companies began to insert exclusions allowing them to deny claims due to virus or bacteria. Explaining the rationale for such exclusions, the American Property Casualty Insurance Association said in a white paper (pdf) that pandemic outbreaks are “uninsurable” because they have “the potential to impact virtually all policyholders, irrespective of location and nearly simultaneously, with losses continuing over the span of months or even years.”

“Stated differently, pandemic risk cannot be spread, shared or diversified across policyholders,” the industry group said, adding that for a risk to be insurable, it must be made up of a large number of “exposure units” so that the losses of the few can be spread out across all policyholders.

Lawmakers in some states have sought to force insurance companies to cover pandemic losses by enacting legislation on retroactive coverage. One such proposed bill in Pennsylvania seeks to accomplish this by redefining “property damage” to include COVID-19 related business interruption.

“It essentially provides that an insurance policy insuring against a loss relating to property damage, including business interruption, shall be construed to cover loss or property damage due to COVID-19 or due to a civil authority order resulting from COVID-19,” writes Newmeyer Dillion, in a legal analysis on Lexology.

Forcing retroactive payouts to cover business disruption losses resulting from the CCP virus pandemic could ultimately put financial stability at risk, the International Association of Insurance Supervisors (IAIS), which groups insurance regulators from the United States, Europe and Asia, argued in May.

Where pandemic risks are covered by a policy, insurers should pay out such claims quickly, IAIS said, but it cautioned “against initiatives seeking to require insurers to retroactively cover Covid-19 related losses.”