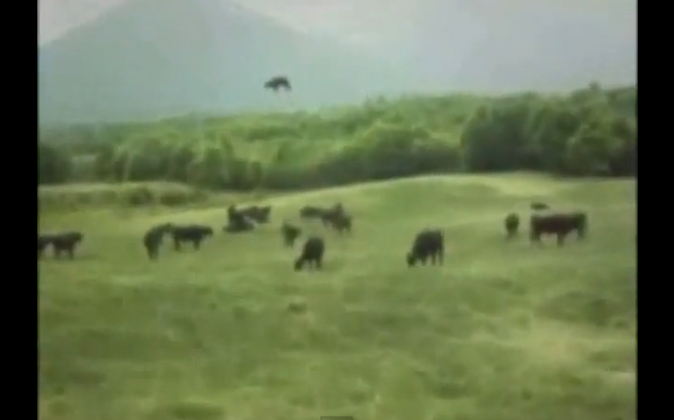 Screen capture of a video from 1983 showing a cow in the distance slowly raising up in the air and then disappearing into a circular cloud. Supporters of the video say that a farmer from Argentina would not know much about video editing and also how the cow shifts its weight in air is very genuine. Critics of the video say that the farmer was bankrupt and was after money. See video below.
Life Beyond Earth

WASHINGTON—Testimonies about extraterrestrial sightings took a grizzly turn during the weeklong Citizens Hearing on Disclosure at the National Press Club on Wednesday.

Journalist, author, and documentary filmmaker Linda Moulton Howe told the panel of former members of Congress about the numerous horribly mutilated animals she has documented as part of her continuing research on extraterrestrials.

She began with a story about one horse which was discovered on a ranch in Alamosa Colorado in 1967.

“The horse had been stripped of flesh” she said. All its organs had been removed and yet there was no blood in or around the animal. There were no tracks either, except at about 100 feet away there were a lot of tracks as if the horse had been caught in a circle, she said.

Howe said there were many more similar cases of animal mutilations around the world, including across South America, North America, parts of Europe, and Australia. The earliest incident she noted was in the early 1900s in Australia where it was reported that over 100 sheep were found mutilated.

Over the years, Howe has received and investigated reports including sightings of extraterrestrial craft which had drawn animals up and then dropped them to the ground. All manner of animals, not only livestock but wild animals too, have been found stripped of their ears, eyes, jaw flesh, tongue, rectum, and sexual organs. None of them showed any trace of struggle, tracks, or blood. She showed slides of a cow which had been mutilated in that way, eye sockets empty and ears missing.

The above video from 1983 shows a cow in the distance slowly rising up in the air and then disappearing into a circular cloud. Supporters of the video say that a farmer from Argentina would not know much about video editing, and also how the cow shifts its weight in air is very genuine. Critics of the video say that the farmer was bankrupt and was after money.

Howe also showed photos of the edge of the flesh where incisions had been made with such precision they appeared to have been cut by a laser. Analysis of the flesh in laboratories revealed signs of extreme heat similar to a laser, except the edges of the flesh were slight cerated and there was no burning effect of black carbon remains.

The former members of Congress are holding the hearing to pressure the U.S. government to release classified material and evidence in what is widely recognised as a government cover-up of well-documented encounters with unidentified flying objects and extraterrestrial beings.

Howe said she has had private discussions with a number of U.S. government officials and members of the military, but none would speak publicly about their experiences.

When asked by former Congress member Lynn Woolsey (D-Ca) why she thought the extraterrestrials would intake the animals, Howe was quick to respond.

“It is a genetic harvest,” she said.

Other witnesses at the hearings have included a number of former military officers who have had direct experience of extraterrestrials at U.S. Military bases, including two officers who had never spoken publicly before.

The hearings continue through to May 3.