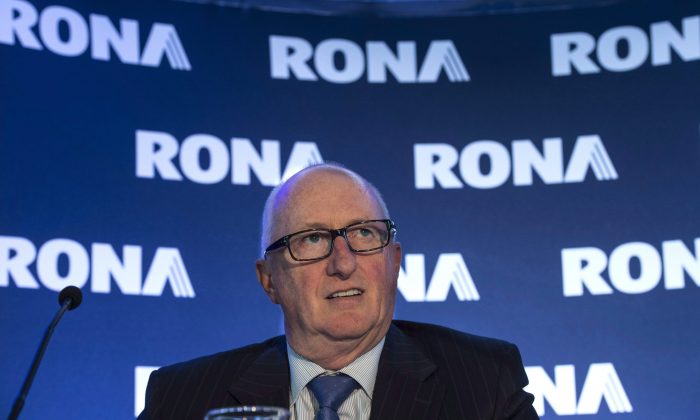 File photo of Rona president and CEO Robert Sawyer at the company’s annual meeting on May 13, 2014 in Boucherville, Que. (The Canadian Press/Paul Chiasson)
Business & Markets

MONTREAL—Rona plans to reopen a couple of shuttered stores next year as the home renovation retailer, sporting improved results, begins to export its Quebec-based Reno-Depot big box banner to Ontario and Alberta.

A Rona store in Calgary North that closed two years ago will reopen as a Reno-Depot, making use of 6,300 square meters of space from the old store, with the remaining 1,350 square meters being sublet. The other Reno-Depot will open in Aurora, Ont., at a location closed last year.

“We’re excited because we are talking about expansion here … disciplined expansion,” CEO Robert Sawyer said Nov. 11 during a conference call after reporting the company’s first boost in traffic in eight years.

“We are also currently analyzing other opportunities in regions where we must protect and reinforce our market share or where the investment is justified by a strong growth potential and good return on invested capital.”

The store openings end a couple of years of downsizing that saw the closing of 17 unprofitable stores since 2012, including 11 over the past year in Ontario and Western Canada. The closures have produced $110 million in annualized cost savings and eliminated 1,000 front-line and management positions.

Rona said the sales were up despite the stagnant economy and sustained pressure on housing starts in Quebec and the Atlantic provinces.

The Reno-Depot expansion comes after the company updated its 16 big box stores by redesigning the shopping experience and adopting a procurement policy to ensure the right amount of merchandise is always in stock.

Excluding one-time items, adjusted profits increased 28 percent to $38.5 million or 33 cents per share, a penny below analyst estimates of 34 cents per share.

Revenue for the national home-improvement chain was $1.167 billion, mostly stable compared with $1.169 billion a year before, despite the closure of underperforming stores that began in June 2013.

Gross margins as a percentage of revenue declined to 25.2 percent from 27.2 percent. That was more than offset by reductions in costs from store closures over the last two years.

Rona is also renewing its share buyback program. It spent $77.4 million to purchase nearly 6.1 million shares in its previous normal course issuers bid, paying a volume weighted price of $12.69 per share. The new buyback program, starting Nov. 18, will give Rona permission—but not an obligation—to repurchase up 9.2 million common shares.