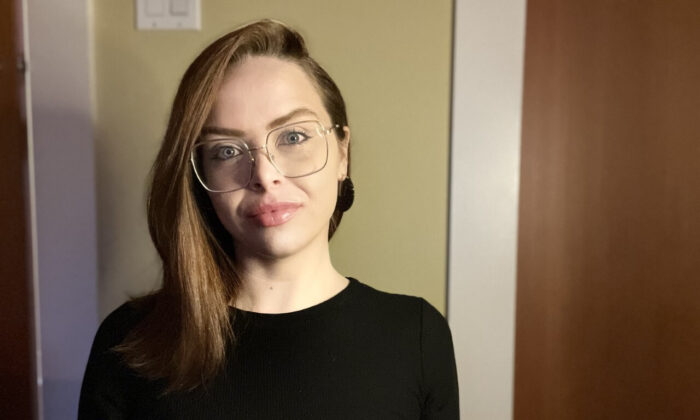 Amy Hamm, a nurse from Vancouver, B.C., is seen in a file photo. (Courtesy of Amy Hamm/JCCF)
Canada

A B.C. nurse is facing a disciplinary hearing after the province’s regulator for nurses and midwives alleged that her remarks about “sex-based rights” were “discriminatory” to transgender people.

The hearing, which began on Sept. 21, raises concerns that Canadian regulatory bodies are “policing the speech” of professionals, a legal advocacy group says.

In November 2020, the British Columbia College of Nurses and Midwives began investigating Amy Hamm, a registered nurse in Vancouver. The regulator referred Hamm to its Disciplinary Committee, which said in a citation that between July 2018 and March 2021, Hamm made “discriminatory and derogatory statements regarding transgender people” across various online platforms.

The Justice Centre for Constitutional Freedoms (JCCF) says the charges against Hamm came in response to public complaints about the nurse’s involvement in erecting a billboard in Vancouver that says “I [love] JK Rowling,” endorsing the British best-selling author’s support for sex-based rights.

“The Justice Centre is concerned that regulatory bodies across Canada are increasingly policing the speech of professionals with threats of disciplinary action,” the group said in a news release on Sept. 21.

Lisa Bildy, lawyer and co-counsel for Hamm, says the regulatory body’s task is “keeping patients safe and regulating the profession in the public interest,” rather than “to give social justice activists a tool for ‘cancelling’ people with whom they do not agree or who have opinions outside of a narrow orthodoxy.”

“Professional governing bodies are created by statute and are therefore subject to the Charter of Rights and Freedoms,” Bildy said in the release. “Freedom of speech, thought, belief, opinion, and expression are Charter rights belonging to all people, even health professionals.”

“This case will set an important precedent for regulated professionals who engage in the public square in policy debates which may be contentious, as it seems virtually everything is in these times.”

In an April 8 blog post, Hamm, a co-founder of Canadian Women’s Sex-Based Rights, an advocacy group for women and girls, said her career as a nurse “hangs in the balance” due to the hearing.

“Depending on the outcome of my disciplinary hearing, which could include being stripped of my nursing license, I will appeal the decision through Canada’s court system if I feel my constitutional rights have been violated. But regardless of the outcome, the process itself is a kind of punishment,” she wrote.

However, she said if she wins the case, “the precedent will help ensure that we can call out gender-identity ideology without fear of reprisal or loss of livelihood.”

‘Women’s Rights Are Not Transphobic’

Hamm said in her blog post that the British Columbia College of Nurses and Midwives (BCCNM) informed her that two individuals made public complaints to the organization “to the effect that I am transphobic and so might be incapable of ‘provid[ing] safe, non-judgemental care to transgender and gender diverse patients.'”

“I am not transphobic by any reasonable or defensible definition of that word. Yet I now could lose my job because activists claim that I am a bigot,” Hamm wrote.

She noted that she has never self-identified as a feminist activist, but has grown increasingly alarmed and has been fighting “the harms that gender-identity ideology was inflicting on women and children,” including the harms caused by gender clinics and puberty blockers for children.

A previous version of the BCCNM’s citation, served on April 1, said some of Hamm’s online statements on sex-based rights included “medically inaccurate information”—an allegation that was later removed from the citation updated on June 28.

Hamm’s lawyer previously said in an email to The Epoch Times that she was “surprised to learn that the College intended to argue about whether Ms. Hamm’s statements constituted medically inaccurate information.”

“It appears they have since thought the better of it,” Bildy said.

When asked to comment on Hamm’s case, BCCNM spokesperson Johanna Ward told The Epoch Times that a nurse’s actions outside of work “have the potential to negatively impact both the public’s perception of them and trust in the nursing profession,” and that behaviours considered “unprofessional conduct” under the Health Professions Act fall under BCCNM’s purview.

“BCCNM recognizes that it’s not appropriate to regulate and discipline all conduct that occurs when a nurse is off duty,” Ward said in a previous email to The Epoch Times. “However, when there is a link between a nurse’s off-duty conduct and the profession that demonstrates a sufficiently negative impact on the profession or the public interest, we can and will take action.”

“BCCNM, regulating in the public interest, recognizes that all British Columbians should feel safe when interacting with registrants of the College. The College takes all allegations of discriminatory comments or conduct against any group seriously.”

When asked for the criteria used to determine whether a nurse’s off-duty behaviour has a “sufficiently negative impact” on their work and image, the BCCNM said that it wouldn’t comment further as the disciplinary hearings are ongoing.