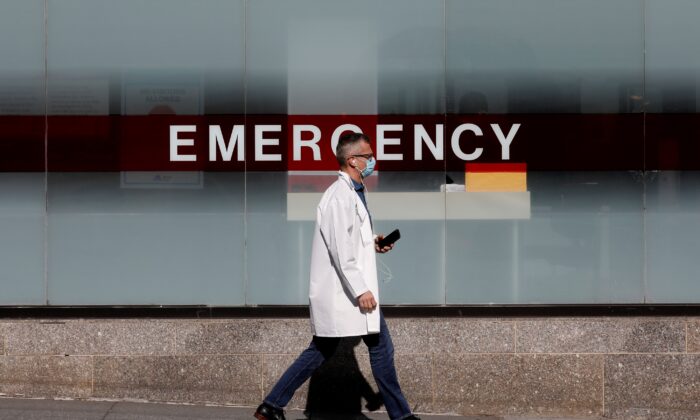 A doctor wears a mask as he walks outside Mount Sinai Hospital in Manhattan during the outbreak of the CCP virus in New York City, New York on April 1, 2020. (Brendan Mcdermid/Reuters)
By Ivan Pentchoukov

Hospitals in New York state have discharged more COVID-19 patients than they have added for four days in a row, according to the latest data from the state hit hardest by the CCP virus pandemic.

Hospitals in the state discharged 1,709 COVID-19 patients on April 4, while admitting 574 patients. The number of daily discharges had also surpassed the daily admissions on the three prior days, state data shows.

New York has been the U.S. epicenter for the Chinese Communist Party (CCP) virus, also known as the novel coronavirus. While New York City has borne the brunt of the outbreak, there has been an increasing shift to Long Island, which now accounts for 22 percent of the state’s COVID-19 hospitalizations.

The number of daily deaths in New York state from COVID-19 dropped for the first time on April 4, when 594 people died, down from 630 deaths the day before, with a total of 4,159 people dying from the disease statewide.

“What is the significance of that? It’s too early to tell,” Cuomo said.

New York state has reported more deaths from the CCP virus than the next nine hardest-hit states combined. Cuomo has repeatedly cited projections that estimate the state has fewer hospital beds than will be needed when the outbreak reaches its apex.

“The coronavirus is truly vicious and effective at what the virus does. It’s an effective killer,” Cuomo said.

The federal government, at the direction of the White House coronavirus task force, has rushed personnel, equipment, and supplies as officials brace for the possibility that the state’s health care system becomes overwhelmed.

The government is sending 1,000 doctors, nurses, and respiratory technicians on April 5, Cuomo said. The White House has also deployed a 1,000-bed hospital ship and directed the retrofitting of the Javits Convention Center into a temporary COVID-19 hospital.

President Donald Trump on April 4 told Americans to prepare for the deadliest two weeks of the CCP virus outbreak. Models used by the White House estimate that 100,000 to 240,000 people may die from the pandemic by the time it is extinguished.

The White House, also on April 4, urged Americans to be extra vigilant about following federal and local social distancing guidelines and orders in the coming week, including, if possible, limiting essential chores, such as trips to the supermarkets and pharmacies.

“The next two weeks are extraordinarily important,” White House coronavirus response coordinator Deborah Birx said. “This is the moment to not be going to the grocery store, not going to the pharmacy, but doing everything you can to keep your family and your friends safe.”