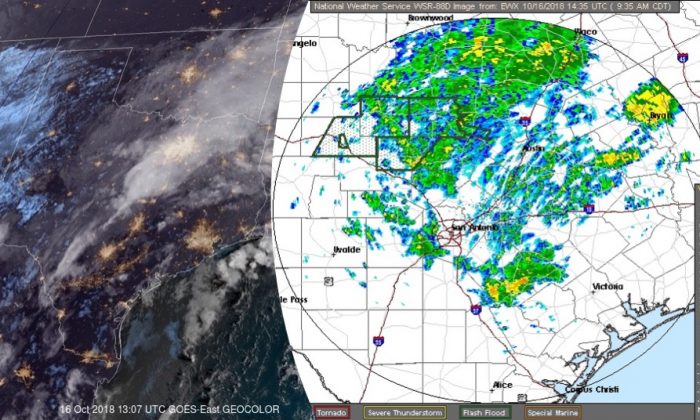 Authorities in Texas are urging residents in low-lying areas of Llano to evacuate immediately, as floodwaters in the Llano River climb past 39 feet—and continue to swell.

Major flooding is ongoing along the Llano River with near record heights, the National Weather Service (NWS) warned in a Civil Emergency Message.

Various locations along the Llano River are expected to flood “disastrously,” according to a National Weather Service update for the area on the morning of Tuesday, Oct. 16, according to NBC affiliate KXAN.

“At 32.0 feet. … Disastrous flooding well into the flood plain will cut off and potentially drown thousands of livestock,” the National Weather Service predicted, KXAN reported. “Homes, resorts, commercial buildings, boats, docks, and marinas will flood disastrously above Castell to Marble Falls on Lake LBJ. Roads and bridges near the river will be severely flooded and dangerous to motorists.”

“If you see floodwaters or come upon a flooded roadway, remember to turn around and do not drown,” an NWS flood warning cautions.

“All are advised to evacuate within one-quarter mile of the river. News stations are broadcasting shelter locations,” the NWS said.

The river was 39 feet at 7 a.m. in Llano. It is projected to crest above the major flood stage and is at its highest level since 1935, KXAN reported.

The Llano County Office of Emergency Management said people trying to go around barricades are currently one of the agency’s biggest concerns.

“People can be swept off the road, out of their cars, or just people standing by trying to sight-see can often find themselves in trouble a lot faster than they imagine that they would,” said Ron Anderson, Llano County Emergency Management coordinator, according to CBS Austin.

“One inch of rain can produce a flooded roadway within minutes,” Anderson said, according to the report. “Any rain that falls right now, it’s pretty much running off into the creeks, streams, roadways, causing flash flooding, and river flooding.”

Anderson said this storm could be even more dangerous.

“The flood we had last week from upstream, we had at least 12 hours of notice that this water is coming our way,” he said. “With flash flooding, it occurs instantly.”

The Llano County Office of Emergency Management is urging people around the county to check for closed roads on the ATXfloods website.

“ATXfloods is a great resource for people to instantaneously see what roads are open or closed in their particular neighborhood,” Anderson said. “Conditions change so rapidly we have to be ready to respond as quickly as possible.”

Multiple shelter locations have been announced.