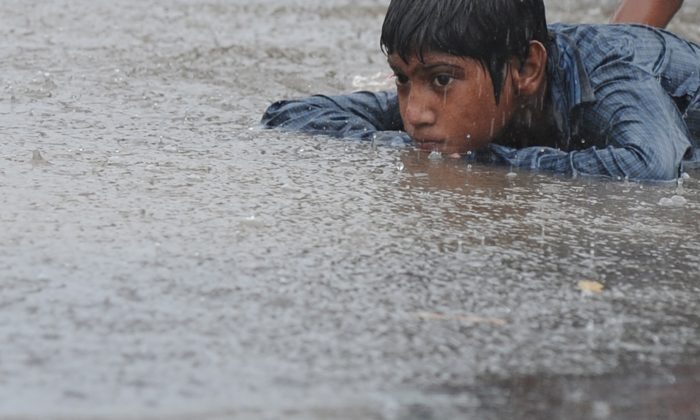 An Indian street child lies on a puddle of water along a road in New Delhi on June 16, 2013. (Sajjad Hussain/AFP/Getty Images)
India

NEW DELHI—In June last year, monsoon floodwaters in the Indian Himalayan region swept entire houses off their foundations, washing them downstream. NGOs said a lack of disaster preparedness caused more damage than the disaster itself. Now, one year later, NGOs are hurrying to prepare communities for what may come as the new monsoon season approaches.

The Himalayas are not an easy place to live. In India, this mountain range is synonymous with religion, spirituality, and nature. These things are integral to the lives of people who live there, and were also badly affected by last year’s disaster. Most of the major temples in the region were damaged.

While rehabilitation work is ongoing, people are anxious about their fate this year.

“Whenever rain comes, they become anxious,” said Rajendra Singh, project manager at Landour Community Hospital, Massourie. His organization has been actively involved in relief and rehabilitation in some hard-to-reach villages in the region.

Singh said the situation is not encouraging.

“The mountain is like a torn cloth. If you stitch it, it can tear apart at any time,” he said.

Singh recalls the desperation he witnessed in the wake of last year’s flood.

“[People’s] houses were flowing like toys [in the turbulent flooded river]. Their livestock was gone. I got testimony from a widow who had 30 goats and sheep. All the sheep were buried under the landslide rubble,” he said, adding that people consider livestock a part of their family.

And a year after being reported missing, bodies are still being found. On Sunday, 17 more skeletal remains were uncovered in the worst hit Kedar Valley.

While NGOs continue to work full-time with the communities, infrastructure restoration has not yet started in many places. A report by IBN News said more than $200 million had been earmarked for building flood-protection embankments, but less than $1 million had been released by the government as of March this year, so the work has barely started.

Due to its harsh terrain, the region is largely inaccessible to the rest of the world, particularly during rains and monsoons. That’s why NGOs are putting a lot of effort into training the communities to take care of themselves when disaster strikes.

Their plan involves forming village-level committees to oversee first response. These committees can help the community before the outside world reaches them with more comprehensive relief.

“Participation is coming from the grass-roots, from the community level, and they are selecting their president, their secretary, their treasurer. And this is how the disaster management community is functioning,” said Singh.

These committees are also taught to raise and save community resources and money for use in times of disaster. They are also taught how to approach government and other agencies for help.