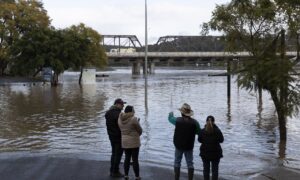 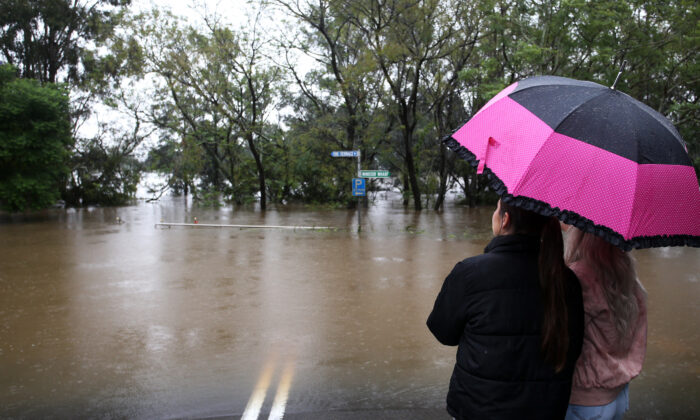 Locals Vickie and Sophie look out at rising floodwaters along the Hawkesbury River from the CBD of Windsor in Sydney, Australia on March 22, 2021. (Lisa Maree Williams/Getty Images)
Australia

Residents who have suffered home damage or severe injuries in the devastating floods sweeping across New South Wales (NSW) are being granted immediate access to disaster relief payments.

Under the AGDRP, eligible residents caught up in the storms and floods can apply for a one-off payment of $1000 for adults and $400 for children.

Those who have lost their livelihoods can also now get a short-term income payment through the DRA for up to 13 weeks.

“Our first concern is for the safety and needs of those directly affected, particularly those whose homes have been inundated by floodwaters,” he said in a statement.

“By making these payments available to the affected residents, the Australian government will ensure that those who have lost or sustained damage to their homes or lost their livelihoods as a result of the floods will have the additional assistance they need.”

In a social media video on Sunday, the prime minister advised flood-impacted residents to claim the relief payments by calling Services Australia on 180 22 66.

“It can be processed over the phone, you just need to provide your details and explain your circumstances to them, and we can arrange those payments to you as quickly as possible,” Morrison said.

More LGAs will be added to the list in consultation with the NSW government, while job seekers’ mutual obligation requirements in the 18 regions have been lifted from March 19 until April 6.

The prime minister has been in contact with NSW Premier Gladys Berejiklian on Sunday to offer the Australian Defence Force’s support.

Morrison acknowledged the need for a “big clean-up operation” on the other side of the floods, the worst to hit metropolitan Sydney in 50 years and the Mid-North Coast in a century.

But he indicated the recovery effort was a problem for another day, urging people to stay safe and listen to authorities.

“They trained for this, they prepare for this, and they’re there to help you right now,” Morrison said.

“I wish you every safety in these very trying times.”

Greens Leader Adam Bandt described the “tragic” weather event as a grim look into an Australian future with bigger fires and worse floods, calling on the federal government to declare a climate emergency.

“‘Unprecedented’ fires one year, ‘once in a 50 year’ floods the next. This is not normal,” Bandt said in a statement.