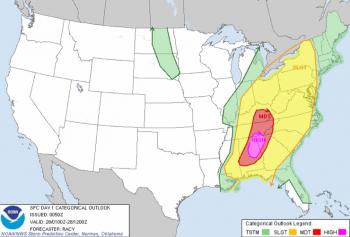 The Storm Prediction Center is forecasting severe thunderstorms over parts of the Gulf States northward through the Ohio Valley and eastward into the Appalachians through late Wednesday evening. (NOAA)
US

Disaster Declared in Alabama as Tornadoes Devastate the South

After a wave of tornado-spawning storms devastated the South on Wednesday, President Barack Obama issued a statement while on his trip to New York City on Wednesday night.

Obama said that he had talked to Alabama Gov. Robert Bentley and approved his request for emergency federal assistance.

After a massive tornado devastated the Alabama city of Tuscaloosa, home to the University of Alabama, and killed at least 15, the university canceled classes for Thursday.

Alabama was the hardest hit state with 61 total confirmed deaths, followed by 15 deaths in Mississippi, two in Georgia, and one in Tennessee, according to the states’ emergency management agencies.

The National Weather Service’s Storm Prediction Center is forecasting “high risk for severe storms” for Thursday. As for overnight Wednesday, the NWS is forecasting the development of potentially widespread damaging winds over parts of the Gulf States northward through the Ohio Valley and eastward into the Appalachians.