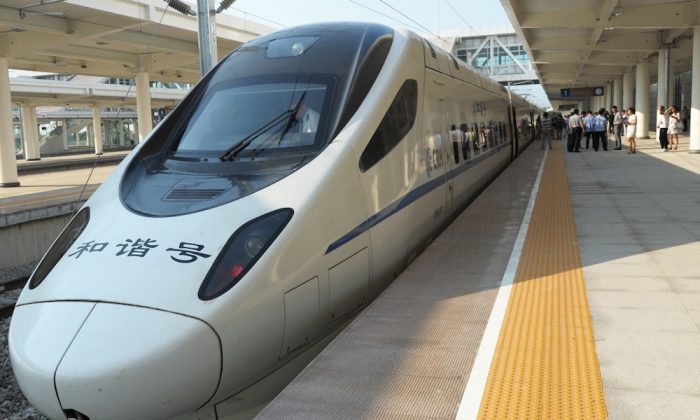 The tepid reception underscores continued investor caution around Chinese stocks that could hinder future listings and cut off a critical funding channel for companies.

For private Chinese companies, the financial markets were the cheapest way to raise capital until mid-June, when the yearlong rally suddenly went into sharp reverse. Chinese stock regulators halted initial public offerings on July 4 as a way to help stem the losses and IPO shares from competing with existing stocks for investor capital.

The state-owned CRSC is the world’s biggest manufacturer of train traffic signaling and controls equipment by revenue.

By all accounts, the company’s stock was a disappointment and a far cry from IPOs of Chinese companies earlier this year. During the first half of 2015, Hong Kong had been the world’s hottest IPO market and newly listed shares posted huge rallies upon debut on high demand from investors.

But the market has since cooled off considerably. CRSC had to sign up 16 cornerstone investors in advance to participate in the IPO, subscribing around 68 percent of the shares offered in total.

The IPO of China Railway Signal & Communication Corp., the world’s biggest manufacturer of train signal equipment, was a far cry from IPOs of Chinese companies earlier this year.

“For the management, the last few months were a process of gradually winding down the expectation. They initially wanted the top-end price to be HK$10,” an unnamed cornerstone investor told the South China Morning Post.

“Given that the market has tumbled from the height in April, paring off the valuations of other railway stocks, the consensus is that CRSC is still expensive despite being priced at the bottom-end.”

A lost fact during the Chinese stock market frenzy over the last year—when the Shanghai Composite Index gained 150 percent the 12 months preceding June 12—is that Chinese shares had become grossly overvalued.

That was the case for exchanges in Shanghai, Shenzhen, and the ChiNext, China’s high-tech bourse.

“The Chinese IPO Internet companies in China are totally crazy,” Kai-Fu Lee, founding president of Google China and one of the most prominent Internet investors in China told the Wall Street Journal last week.

“Most of the good ones have gone public in the U.S. or are in the pipeline in the U.S. So the few that were left in China were just blown out of proportion,” he said.

The Shanghai Composite tumbled more than 14 percent in July, sending investors to the sidelines. According to data from the China Securities Depository & Clearing Corp., more than 20 million individual accounts—almost a third of the country’s retail investors—pulled out of the market.

And that doesn’t bode well for companies looking to raise funds through an IPO.

China Merchants Securities, one of mainland China’s biggest stock brokerages, had to scale back its ambitions for an IPO. The company aimed to raise $4 billion in a stock offering in Hong Kong. But in light of the recent stock market turmoil in China the company last week announced plans for a much smaller offering size.

For small firms with less name-recognition, their IPO dreams may have just been shattered.