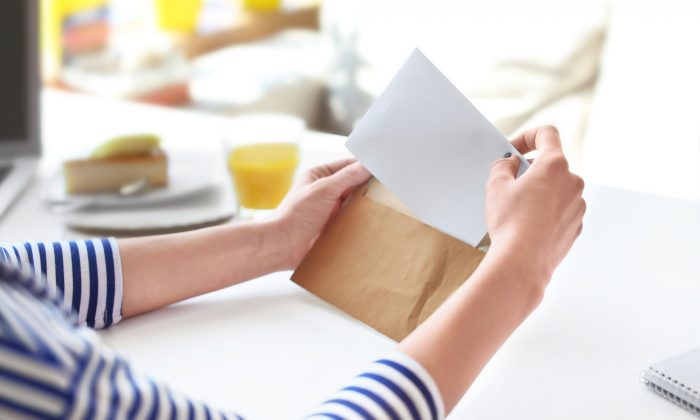 An Oregon woman shared about a touching act of kindness that has gone viral.

Brittany Lynn Garrett wrote on the Love What Matters Facebook page detailing the act of kindness.

“As I was getting ready for my day, my husband appeared at the door with tears in his eyes holding our son,” Garrett said on Facebook. “My heart sank and I thought someone we love took a trip to Heaven… He quickly assured me that no one had died, but someone had just given him a very expensive riding lawn mower!”

She said she had no clue who sent him the generous gift.

“I don’t know who they are, but they have been watching my 100% combat disabled husband push mow our entire yard once or twice a week, and thought this would help make more time for the important things in life!!” she wrote.

The person left a note for the family in an envelope.

“I hope this saves time for the things that matter most in your life. Thank you for your service and for my freedom,” the note read, signed by “a grateful American.”

According to Garrett, her husband was a U.S. Army specialist. He suffered an injury that left him disabled in Afghanistan, IJR reported, which said he suffered injuries in his abdomen and backside. His pelvis was also totally shattered before he was rushed to the hospital.

For him, when he returned home, he tried to return to a “normal” life, but it became difficult due to his injuries.

According to the IJR report, a neighbor may have seen him struggling to cut the grass and helped out. However, the family is still not sure who sent the lawnmower.

Garrett added that the new mower is going to save her husband a lot of pain, Fox5 reported.

“THANK YOU WHOEVER YOU ARE!!! You don’t know how much pain this is going to save him from!!!” she also wrote.

Her post, meanwhile, has been shared hundreds of thousands of times.

Walter Stoller, an older army veteran, had been homeless until Ryan Jacobsen, 46, a retired Navy vet from Wauconda, who works as a case manager for the non-profit organization TLS Veterans, found Stoller a place to live in Rockford with another homeless vet.

TLS Veterans stands for Transforming Lives through Service to Veterans.

Jacobsen was in the Navy for 20 years, and he understands that often, vets can become displaced and need support.

“We assist struggling veterans and their families that are homeless, or at risk of becoming homeless.”

“Sadly, there are quite a few out there,” he said, according to the DailyHerald.

Stoller had no way of getting out and about, as he didn’t own a car.

That’s when Jacobsen stepped in and organized a special gift for him.