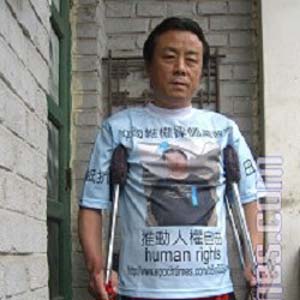 Beijing-based rights defender Qi Zhiyong was arrested on May 15, his birthday. His friends who were invited to his birthday party were also detained. The charges for this detention are still unknown. The following is an Epoch Times interview with Qi prior to his arrest.

In the interview, Qi said he was crippled after being shot in the leg when army troops were sent in to end the Tiananmen protests in 1989. For 18 years, he regarded June 4 as his second birthday. He speaks out for the truth of the Tiananmen Square Massacre every year. He also supports the massive withdrawals from the Chinese Communist Party. He thinks that it's time for this communist regime to retreat from the historic stage thoroughly.

Qi said, as a victim, he should testify on the anniversary of Tiananmen Square Massacre every year so that he will not let down the memory of the brave youths who were murdered in the protest, and not let down their mothers.

“A lot of college students came from the rural area. Those students still had a belief in the Chinese Communist Party … and so did their mothers. All of them were deceived by the Communist Party. I feel tremendously sad. I need to keep exposing the truth.”

Qi said, “The police in military clothes shot down unarmed citizens and students with their guns. Tanks and armoured vehicles were everywhere in the streets. On June 4, 1989, I realized that the Chinese Communist Party was the real butcher.”

“The first shot really woke me up. It allowed me to see who the real enemy was and who the real butchers were. I saw the ugly face and the gangster behaviours of the Chinese communist regime. I'd love to see this party disintegrate totally from China's stage.”

Qi said, “The party was never genuinely dedicated to the Chinese people. They never listened to the people or accepted people's appeal to strike down graft and corruption. All they have done is bully and oppress citizens, seize citizens' property, and trample on the heart of Chinese people.”

Qi said he has lost his job and well-being because of his insisting on telling the truth about the Chinese regime. Though he will lead an increasingly difficult life, he refuses to compromise with the tyranny of the communist regime.