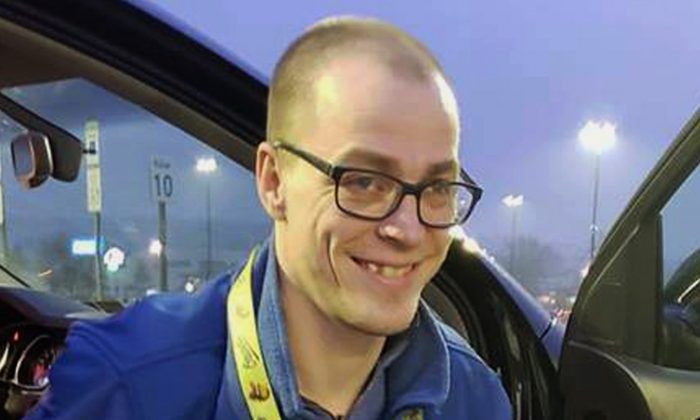 Adam Catlin gets out of a car before starting his shift at a Walmart in Selinsgrove, Pa., on Dec. 14, 2018. (Holly Catlin via AP)
US News

Disabled Greeter Meets With Walmart About Job; No Resolution

A beloved, longtime Walmart greeter with cerebral palsy met with store management in Pennsylvania on Feb. 22, in a bid to keep his job but came away with no guarantees, and his family is girding for a fight.

Adam Catlin, who uses a walker and is legally blind, is worried he’ll be out of work after store management told him he would need to be able to lift heavy weights, read receipts and perform other tasks. The retailer has been replacing “people greeters” with “customer hosts” who are responsible for helping with returns, checking receipts to help prevent shoplifting, and keeping the front of the store clean.

If you shop at the Selinsgrove @Walmart you probably know Adam Catlin. He’s been a greeter there for ten years. Adam has cerebral palsy and recently found out his job description changed, making him unable to do the new job. He hopes telling his story will make Walmart rethink pic.twitter.com/ld77WereuZ

Catlin, 30,—who has been a fixture at the Selinsgrove store since graduating from high school—and his family met with Walmart officials for two hours Friday afternoon. His mother, Holly Catlin, said management suggested several other open positions, including cashier and photo lab assistant, none of which he is physically capable of doing.

She said she insisted her son could do the host job if Walmart would make reasonable accommodations, as required by federal disability law.

“Everyone was very nice, it wasn’t ugly at all, but we didn’t really get anywhere,” Holly Catlin said. “I don’t know where we stand, but I’m not backing down. He must still have a job. There’s just no way around it.”

Walmart said it’s working with Catlin on a resolution.

“We recognize this is a unique situation and it will take time to explore possible solutions. As we phase the greeter role out of this store over a 60-day period, our store management and local human resource teams will be in regular contact with Adam and his family as we explore every available option to him,” said Walmart spokesman Kory Lundberg. “We will be thoughtful during the process in hopes of finding a way for Adam to stay with the store.”

At least a dozen disabled Walmart greeters in seven states—Illinois, New York, Pennsylvania, South Carolina, Texas, Utah, and Wisconsin—say they were pushed out the door, forced to accept lower pay or otherwise harmed when the retailer replaced the greeter job with host, according to the National Disability Rights Network, whose state affiliates are working with impacted employees, and in some cases suing Walmart.

The issue exploded into public view after Catlin’s mother wrote an impassioned Facebook post this week, and thousands of people have since rallied to his cause.

Holly Catlin said she has personally heard from 25 or 30 disabled Walmart greeters who told her they have lost their jobs.

“What makes me really sad is if we fix this for Adam, there are still those 25 or 30 people who are still out of a job and don’t know where to turn. It makes me sick,” she said. “I feel I need to go to bat for them.”