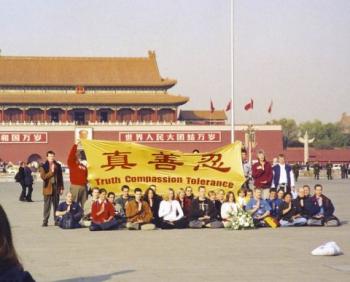 Renate Lilge-Stoedieck
Print
Asians have reluctantly adopted the Western handshake. Traditionally Asians believe that vital energy, Qi, and all the good and bad attributes that come with it, can transfer from one person to another through physical contact. People only tolerate contact willingly if it is to their advantage, for instance in the transfer of healing Qi. Actually, this way of thinking is slowly taking hold in the West, too. Who would like to be touched by dirty hands?

Many people shake Mr. Liu Qi's dirty hands, as he has been President of the Beijing Olympic Committee (BOCOG) since 2007. His hands became particularly soiled between 1999 and 2002, in his position as Mayor of Beijing.

Liu Qi was served with court papers in San Francisco in 2002 during a visit to Salt Lake City as head of the Chinese Olympic Team to participate in the Winter Games. The lawsuit accused him of torture, inhumane treatment, mistreatment, crimes against humanity and other cruelties, as well as crimes against religious freedom and belief. These crimes took place during his tenure as Mayor of Beijing

Two Chinese nationals, two Swiss, one French citizen and one American filed the suit according to the International Law of Restitution for the Protection of Victims of Persecution. These six individuals were subjected to beatings and threats for peacefully protesting against the persecution of Falun Gong.

Some of those who filed the lawsuit had participated in an appeal on Tiananmen Square in 2001, where 36 persons from different nations held a banner and sat in meditation before being arrested, an incident which caught the attention of the international community. The participants, seven of them Germans, were arrested within a few minutes, beaten and detained without an opportunity to notify their embassies.

A decision by U.S. Judge Wilkin in the Northern District of California in December 2004 found that Liu Qi, in his role as Beijing Party Secretary, was responsible for crimes against humanity, torture and persecution of Falun Gong at the hands of police in Beijing.

In spite of immense pressure from the Chinese regime, the judge ruled according to the evidence. That sent China an important message—those who persecute Falun Gong cannot claim immunity.

He explained that it is a foregone conclusion for foreign members of the diplomatic corps who carry out their duties in the United States that they must obey the laws of their own nations. The guilty verdict sent a clear message that Liu Qi had broken Chinese law in his persecution of Falun Gong. The Chinese Constitution clearly states that people have freedom of belief.

As is evident from recent, worldwide incidents of genocide or crimes against humanity, the mills of justice grind slowly, but they grind steadily. Argentina, Chile and Serbia are three examples. Liu Qi will also soon see his day in court.

Until that day comes, many official guests at the Olympics will continue to shake his dirty hands, but is highly likely that none of these people are oblivious to his deeds.