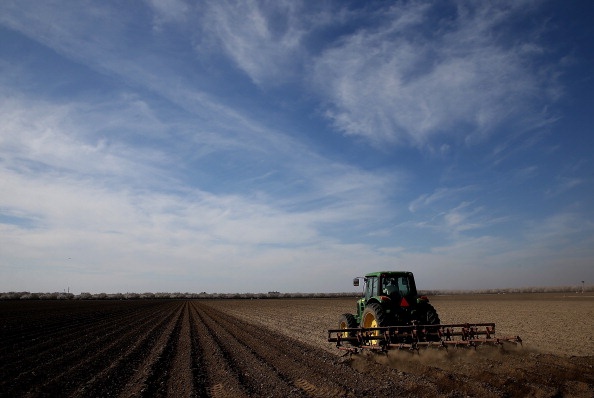 Dirty for Decades, Diesel Tractors, Bulldozers Get Cleaned Up

Dark clouds of soot and gases spewed by tractors, bulldozers and backhoes are becoming a thing of the past under new federal standards that have forced cleaner diesel engines this year.

While trucks and buses have been cleaned up, it’s taken years longer for farm and construction equipment to keep pace.

That’s because these diesel-powered vehicles come in many shapes and sizes, all with different workload demands, and there aren’t always convenient places to slap a filter on their engines.

“It’s been a real challenge getting to this point,” said Allen Schaeffer, executive director of the Diesel Technology Forum, which represents engine manufacturers. “But all of this work has virtually eliminated nitrogen oxide and particulate matter from diesel engines.”

Under these Tier 4 standards, fine particles – which are linked to heart attacks and respiratory disease – and nitrogen oxides – which contribute to smog – were reduced 90 percent in 2014 models compared with 1996 engines.

Manufacturers, however, have gone above and beyond the standards, cutting the two pollutants by 99 percent, Schaeffer said. Carbon dioxide, a greenhouse gas linked to climate change, also has been reduced through improved fuel efficiency. {Editor’s Note: Original story said filters also reduce CO2. They do not. 3/21/2014}

Nevertheless, the new tractors, excavators and other non-road diesels remain dirtier than trucks and buses. They are allowed to emit about 50 percent more grams of particles and nitrogen oxides per kilowatt-hour.

Heavy-duty trucks, since they all have the same basic design, have used similar technologies to cut pollution for seven years. But Schaeffer said “one size doesn’t fit all” for farm and construction equipment.

Engine manufacturers also are targeting emissions at the engine level or through filters that trap pollutants.

There are “almost infinite varieties of installation,” said Scott Woodruff, director of industrial sales for MTU America, a global manufacturer of off-highway diesel engines that is part of Rolls-Royce Power Systems.

Caterpillar Inc., one of the world’s largest manufacturers of non-road diesel engines, started modifying its mid-size engines about a decade ago in preparation for the new standards, said Matthew Delzell, its marketing and sales support supervisor.

The company tackled nitrogen oxides at the combustion stage – by recycling and recirculating exhaust – and targeted particulate matter after combustion, largely with filters, Delzell said.

MTU America wanted to limit its reliance on catching pollutants at the exhaust stage, Woodruff said. Instead, they have largely used cylinder combustion control, which controls the timing and geometry of engines to prevent pollutants from forming in the first place. They also added selective catalytic reduction, which uses a catalyst to trigger a chemical reaction that converts nitrogen oxides into non-harmful elements.

The company’s largest investment has been limiting combustion itself, largely through improved engine software and fuel injection, Woodruff said.

The fixes haven’t been cheap. Both MTU and Caterpillar said the research and development costs were substantial, although they declined to reveal their costs. {Editor’s Note: An original version of this story said the companies received federal subsidies; they did not. The funding went to diesel owners. 3/21/2014.]

The EPA estimated in 2004 that the new technologies would cost $1.7 billion and add 1 to 3 percent to each machine’s total cost. That amounts to as much as $3,000 for a tractor that cost $100,000. Construction and farm equipment can range from tens of thousands of dollars each to several hundred thousand dollars.

Woodruff, however, said that the latest standards have added much higher costs than the EPA originally estimated – between 30 and 60 percent per engine.

Farmers are “a little concerned” about the diesel regulations because equipment costs are rising, said Andrew Walmsley, director of congressional relations at the American Farm Bureau.

The federal regulations do not include incentives for farmers to buy new, cleaner equipment.

“We’re pretty good at keeping the older equipment together with duct tape and wire,” Walmsley said, adding that it’s not uncommon to still see tractors and combines from the 1950s and 1960s.

The standards are designed to protect public health, as well as the health of farmers and construction workers. Diesel exhaust is a carcinogen, and PM2.5 is linked to deaths from respiratory disease and heart attacks. Construction workers, truck drivers and railroad workers are more at risk of diesel-related illnesses. In addition, nitrogen oxides help form ozone, the main ingredient of smog.

The EPA estimated that by 2030, the new standards will prevent 12,000 premature deaths and 8,900 hospitalizations per year.

Emissions from the farm and construction equipment already have declined substantially. Volumes of nitrogen oxides and PM2.5 from non-road diesels already are down 25 to 31 percent compared with a decade ago.

The American Lung Association is “very pleased” with the improvements that diesel manufacturers have made, but concerns remain about the old engines, said Janice Nolen, assistant vice president of the association’s national policy program.

“The challenge with diesel is that it takes fleets so long to turn over,” Nolen said. “Things like tractors, power generators often are not used enough to have to be replaced often, so the old equipment continues to be a serious health concern.”

Delzell said there are no efforts at Caterpillar to encourage recycling old equipment but improvements in fuel economy could be a natural incentive.

EPA officials did not respond to EHN’s repeated requests for interviews for this story.

“The challenge with diesel is that it takes fleets so long to turn over. Things like tractors, power generators often are not used enough to have to be replaced often, so the old equipment continues to be a serious health concern.” –Janice Nolen, American Lung AssociationThe last phase of the rules will kick in next year, applicable to engines larger than 750 horsepower, which are used in mining trucks, locomotives and ships.

“We just hope the standards will allow us to sell these engines before they change the damn rules again,” Woodruff said. “I’m all for standards, but there will be companies that will cease to exist if the regulations continue.”

Market trends suggest that diesel, which has been the preferred power source of heavy-duty engines since the 1920s, is here to stay.

The diesel engine industry generates about $143 billion annually worldwide, and sales of both on-road and off-road diesels are expected to grow about 6.7 percent over the next two years, according to a report from the Freedonia Group, a market research company.

“Diesel engines power many aspects of our economy,” Schaeffer said. “Getting the industry clean has not moved people away from it. If anything, it’s provided the platform for it to be competitive in the future.”

EHN welcomes republication of our stories, but we require that publications include the author’s name and Environmental Health News at the top of the piece, along with a link back to EHN’s version.

For questions or feedback about this piece, contact Editor in Chief Marla Cone at mcone@ehn.org.

This article was originally published at www.environmentalhealthnews.org. Please visit their website for orginal article.