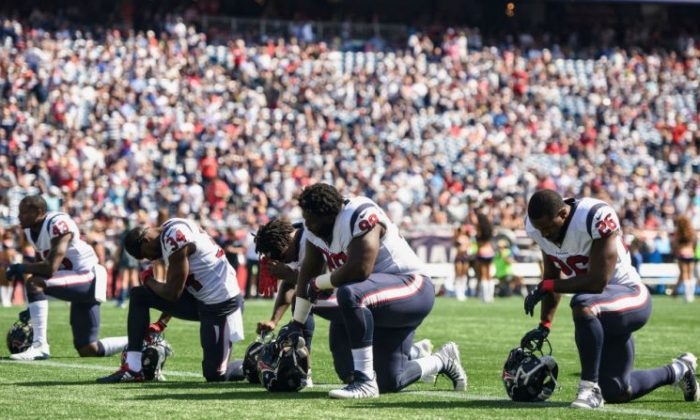 Members of the Houston Texans kneel before a game against the New England Patriots at Gillette Stadium in Foxboro, Massachusetts, on Sept. 24, 2017. (Billie Weiss/Getty Images)
US News

DirecTV is refunding at least some customers the price of the NFL Sunday Ticket package if they mention the national anthem protests as the reason for cancellation, Fox Business reported.

The terms of the ticket package state that customers can’t cancel it once the season is in progress, but some customer service representatives said that an exception to the rule is in effect due to the unprecedented protests by NFL players during the national anthem.

When The Wall Street Journal contacted several customer service representatives, it appeared that they had varying understandings of the policy. One representative said that full refunds are available for people complaining about the national anthem, while another said that those refunds apply only to certain packages.

“I honestly didn’t think I’d get a refund,” Hoffman said. “I know their guidelines, I just wanted to make a point.”

More than 200 players from different teams kneeled during the national anthem on Sunday, Sept. 24, in response to President Donald Trump’s demand that NFL team owners should fire players who disrespect the anthem and what it represents.

“For people to disrespect that by kneeling during the playing of our national anthem, I think is disgraceful,” Trump said on Tuesday.

Both the team owners and the league have largely sided with the players. But the protests are a crisis for the NFL, since two-thirds of Americans believe that the players should stand for the national anthem.

Meanwhile, the protests appear to be bad for ratings and, as a result, for business. According to Fox Business, Sunday Ticket earns $1.5 billion in licensing revenue for the NFL and draws a large number of customers to DirecTV. That revenue is at risk of declining as ratings continue to slide. NFL viewership declined last year and the trend is continuing.

In another sign of crisis, the NFL posted a job ad for a “Crisis Communications Strategist” to “provide crisis communications counsel to leagues executives,” Zero Hedge reported.

On Tuesday, Trump doubled down on his criticism of the players who kneel during the anthem, suggesting that the NFL should create a rule requiring players to stand during the performance of “The Star-Spangled Banner.”

“The NFL has all sorts of rules and regulations,” the president wrote on Twitter. “The only way out for them is to set a rule that you can’t kneel during our National Anthem!”

The first NFL player to kneel during the national anthem was Colin Kaepernick, who said he did it to protest police brutality and racial injustice. Kaepernick drew the national spotlight with his protest, but has not been hired by any team since becoming a free agent.