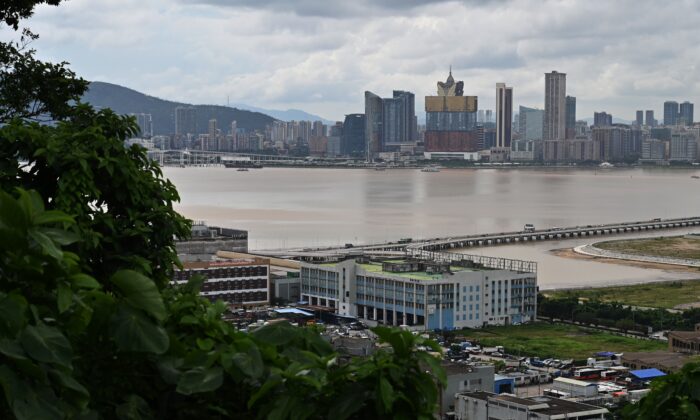 View of hotels and casinos in Macau on June 18, 2019. (HECTOR RETAMAL/AFP via Getty Images)
China-US News

The directors of an influential U.S. business group in Hong Kong were refused entry to Macau on Dec. 7 after several hours of detention at customs.

Tara Joseph and Robert Grieves, president and chairman of the American Chamber of Commerce in Hong Kong (AmCham) respectively, were separately prevented from entering the nearby city of Macau, a former Portuguese colony, where they were due for the annual AmCham Macau Ball, according to a Dec. 7 statement.

Both received no explanation for the denial of entry and had to sign a statement that they “voluntarily agreed not to pursue entry into Macau,” the statement revealed.

The two have since returned to Hong Kong without difficulty.

The AmCham officials said they were puzzled that the Macau authorities would refuse their entry for an annual social gathering event.

“We hope that this is just an over reaction to current events and that international business can constructively forge ahead,” the statement said.

Joseph, an American citizen residing in Hong Kong, told Reuters that she was held for about two hours by immigration officials.

“I have no idea. I was quite surprised,” she said, adding that there was “never any manhandling or rudeness.”

The incident came one day after China’s Ministry of Foreign Affairs confirmed a restriction on U.S. diplomats in China, which would require them to notify the ministry five days in advance of any meetings with local government officials.

Hua Chunying, China’s foreign ministry spokesperson, said it was a “reciprocal measure” to the restriction made by the U.S. side back in October. It has come into effect since Dec. 4.

The State Department on Oct. 16 announced plans to make Chinese officials report ahead of time any contact with American educators, researchers, as well as local and state governments. U.S. officials said at the time that the decision was still less stringent than the restrictions set in place on U.S. diplomats in China, who had to seek permission from Chinese authorities before any such meetings.

Beijing has vowed to retaliate after President Donald Trump signed the Hong Kong human rights bill into law on Nov. 27.

On Dec. 2, the regime said it would block U.S. military vessels from entering Hong Kong port and impose unspecified sanctions against several American non-profit organizations for taking a supportive stance toward the Hong Kong protests.

Around some 6,000 people have been arrested in Hong Kong for their involvement in the protests, with about a third of them aged between 20 and 25.

The protests were sparked by widely shared anger over the local government’s insistence on an extradition bill that would have allowed the Chinese Communist Party (CCP) to arrest any individual passing through Hong Kong and sent them back to the mainland for trial in courts without the rule of law.