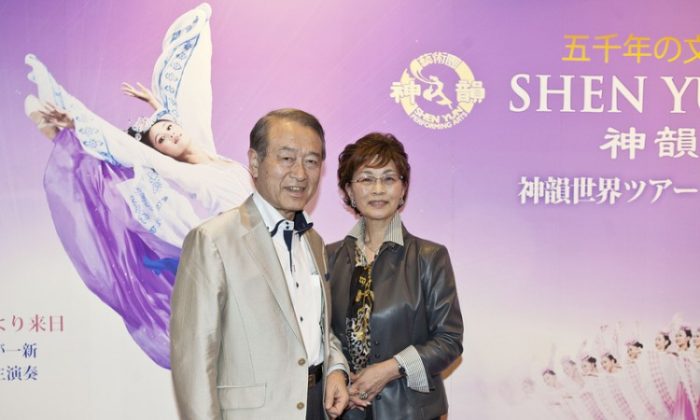 Mr. Shiraki praised the performance, saying: “In China, there are 56 ethnic groups, and each of them has its own distinct national costumes and dances. This is my first time seeing Shen Yun and I feel it is enchanting, very gorgeous, brilliant and very beautiful. In addition, it also has perfectly-coordinated high-tech backdrops. This is indeed an artistic feast for my eyes.”

As part of the Shen Yun performance, some contemporary dances show the bravery and courage of practitioners of Falun Dafa, a peaceful, spiritual mind-body discipline, who are being persecuted in China today. Mr. Shiraki said: “As art is borderless, the artistic performance also includes the program depicting the on-going persecution in China. It let me once again feel the importance of freedom of expression. Ancient China is totally different from what it is now.”

Mrs. Shiraki commented on what she saw as the difference between ancient and modern-day China: “It is completely different, which made me feel it was really incredible, as the difference is indeed so huge. China was supposed to be what was demonstrated in the show, but the reality is not so. No matter where you go [in China], you’ll be disappointed.”

Mr. Shiraki said, “We have been to Taiwan recently, and found that Taiwan is very beautiful. Although their origins are the same, the Chinese culture in Taiwan is totally different from what is in China. The divinely inspired culture has been preserved very well in Taiwan, but it has been destroyed very seriously in mainland China. The situation in China is not supposed to be like that.”

Mrs. Shiraki, who has traveled to China with her husband, said: “Shen Yun’s music was so beautiful, and it made me think of China nowadays. When I traveled in China, what I saw was a completely different China. It was really inconceivable.”

Based in New York, Shen Yun has a mission to revive China’s 5,000 years of divinely inspired culture, and take audiences on a journey through China’s history, from ancient times to modern times. Mr. Shiraki said, “It is indeed remarkable that Shen Yun spread the essence of the traditional Chinese culture to people in various countries the world over.”

“Nowadays, there are many Chinese people living in various countries. But it is my view that they may not be the same as those who live in China, as they have more opportunities to see the outside world, and interact with people there. In a way, China seems to be in the limelight nowadays, but many countries are cautious about it. China has made some advancement in technology, and has a large population. If it can attach more importance to the world’s peace, as opposed to armed force, and show its respect for Buddhas and gods, it would be great,” Mr. Shiraki said.